Everything About The Witcher Season 2

Has it really been almost 2 years since Henry Cavill burst onto our screens as the gravel voiced Witcher of Rivia? Well, it has been a long wait but it is almost over – The Witcher Season 2 will be here soon! Geralt of Rivia will be back on our screens very soon with Season 2 airing on Netflix on December 17. To say we can’t wait here at Reign Of Reads is something of an understatement!

So we have rounded up everything you need to know about The Witcher Season 2 ahead of it’s start date. WARNING: There may be Season 1 spoilers ahead!

The Witcher TV Series is based on the The Witcher Book Series (consisting of 6 fantasy novels and 15 short stories) written by Polish author Andrzej Sapkowski.  The series is set in an unnamed continent and revolves around the protagonist, renowned monster-slayer-for-hire Geralt of Rivia, a powerful sorceress Yennefer of Venderburg and Ciri, a girl who is described as Geralt’s destiny.

After the books obtained something of a cult following in Central and Eastern European countries, the series was successfully adapted into a trilogy of Video Games by CD Projekt Red (with the third title in the series Witcher: Wild Hunt selling over 50 million copies).  The most recent addition to the franchise is the Netflix TV show which released in 2019 with a second series set to air on December 17 2021.

The official synopsis for Season 2 reads:

“Convinced Yennefer’s life was lost at the Battle of Sodden, Geralt of Rivia brings Princess Cirilla to the safest place he knows, his childhood home of Kaer Morhen.”

“While the Continent’s kings, elves, humans and demons strive for supremacy outside its walls, he must protect the girl from something far more dangerous: the mysterious power she possesses inside.”

Check out the Season 2 Trailer here:

The Witcher Season 1 On Netflix

In 2019 Netflix released the long anticipated TV adaption to the Witcher Books Series, available to stream on it’s platform. The first season consists of eight episodes and is based on The Last Wish and Sword of Destiny, which are collections of short stories that precede the main Witcher saga.

Vengerberg at different points of time, exploring formative events that shaped their characters, before eventually merging into a single timeline detailing the invaders from Nilfgaard. On it’s debut The Witcher was the third most in demand streaming original (only behind Stranger things and The Mandolorian). The success of the TV show also increased sales in the games series by a large margin.

Response to the series:

The Author himself Andrzej Sapkowski has seemed pleased with the Netflix adaption of his books. “I was more than happy with Henry Cavill’s appearance as The Witcher. He’s a real professional. Just as Viggo Mortensen gave his face to Aragorn (in The Lord of the Rings), so Henry gave his to Geralt — and it shall be forever so.”

The series was met with mostly positive reviews from critics. “If you’re looking for an original dark fantasy with some horror elements, some bare skin and plenty of blood and gore (and monsters) look no further.” Erik Kain of Forbes

Check out the Season 1 trailer here:

If you haven’t already watched season 1 or if you feel like a catch up before season starts then check it out on the following link:

Click Here To Watch The Witcher Season 1 On Netflix

Much of the cast from season 1 are returning with a few new additions, here’s what we know about the The Witcher season 2 cast:

The episode titles for season 2 have been released as follows: 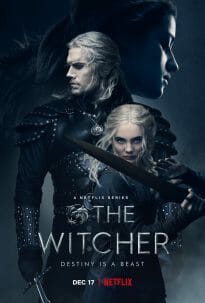 Season 2 will open with an adaptation of the short story “A Grain of Truth,” which introduces Geralt’s old friend Nivellen.  Nivellen is hiding a dark secret from Geralt.  The rest of the season will then dive further into the saga with the first book in the series, Blood of Elves.

Other The Witcher Season 2 Fun Facts!

Are you excited for The Witcher season 2? Let us know!

If you liked this, then check out these articles