Full of action fantasy and epic battles, it’s no wonder why fantasy stories are so popular. And whilst there are so many around, we managed to narrow it down to our top 24 favorite fantasy anime series! With amazing characters and stories that excite us, these really are the best that you really need to watch. So, if you’re ready for vampires, demons, ghouls, and more, then get ready to start a new fantastic fantasy adventure with these anime shows!

Trevor Belmont, the last surviving member of his family, is on a quest to save Europe from Dracula’s plan for human extinction. Along the way, he meets the son of Dracula, Alucard, who rejects his father’s ideology, and Cipher, a powerful witch from Wallachia, who aids him in his hunt. But Dracula has more problems than Trevor and his team: a beautiful vampire queen from Styria, Carmilla, who wants to take away his power.

Centuries ago, humanity was forced to retreat behind 50-meter tall walls for protection from titans, giant humanoid creatures that prey on humans. Then suddenly a titan appears that stands 60-meters tall and with one kick, brings the years of safety to an end. With his mother dead and father missing, Eren swears to get revenge and slaughter every titan. Eren joins the Military with his friends Armin and Mikasa to fight the titans and take back their home. But when strange things start happening, the Military soon realizes the enemy may be closer than they think.

Based on the popular manga series, a lot of anime fan love this show!

After their single mother died of a lingering illness, brothers Edward and Alphonse Elric, traveled the world in order to learn more about alchemy to raise their mother from the dead. But it’s impossible to do correctly and the transmutation leaves Al without a body and Ed without his left leg and his right arm, which he gave up to save his brother. With prosthetics made for Ed and Al’s soul in a suit of amour, they burn down their home and become State Alchemists in an attempt to find the Philosopher’s Stone and regain their full bodies back.

Yuji Itadori is a normal high school student and a member of the Occult Research Club. After the death of his grandfather, he is confronted by Megumi Fushiguro, a sorcerer, who informs him that he had recently come into contact with a high-grade curse talisman. Meanwhile, Yuji’s friends at the Occult Club unseal a talisman they found at the school, a rotting finger, which attracts Curses to them. Unable to properly protect them and Megumi, Yuji does the only thing he can think of – he swallows the finger.

Death City is home to the famous Death Weapon Meister Academy. Its mission is to raise ‘Death Scythes’ for the Shinigami to wield against the many evils of their world. These Death Scythes are born from human hybrids who have the ability to transform into Demon Weapons, but only after they have consumed the souls of 99 evil beings and one witch’s soul. This follows the story of the Demon Weapon, Soul Eater Evans, and his wielder, Maka Albarn.

A mysterious, immortal being known as ‘the Orb’ – or Fushi – is sent down to Earth. Fushi is able to take the shape of those that leave a strong impression on it, in order to stimulate as it learns what it is to be truly human. The story follows Fushi as it travels, learning about the world and the people living in it.

On his way back home after traveling to the village, Tanjiro takes shelter overnight in the house of a man who warns him of flesh-eating demons that lurk in the woods at night. When he returns home, he is met with a horrifying sight. With his young girl sister turned into a demon, yet still showing emotions and remnants of her lost humanity, he vows to protect her and becomes a member of the Demon Slayer Corps. He will do whatever it takes to slay demons and protect his sister.

This tells the story of the Joestar family, where various members discover that they are destined to take down supernatural forces using their powers. Each member of the Joestar family has their own unique part, where their names can typically be abbreviated to ‘JoJo’.

Three gifted children of an idyllic orphanage accidentally discover the sinister purpose that they were raised for. They know they need to escape, but time is running out as one of them is about to be ‘adopted’. How can they come up with a plan in time that lets them all escape with the younger children?

Gon has been told his whole life that his parents were dead. But then he discovers that his father was alive and a Hunter – someone who captures criminals and bravely searches for lost treasures in uncharted lands. Gon soon realizes that the path to becoming a Hunter is more difficult than he could ever have imagined.

After their village is attacked by a nine-tailed fox, the leader of the village sacrifices himself and seals the beast inside of the newborn Naruto. Shunned because of the beast, Naruto struggles to find his place, he desires to become the Hokage of Konohagakure, the new leader of the village. An adventure that leads him not only to new friends but to dangerous enemies.

Ghouls live among humans, they look like normal people, but they can survive only by eating human flesh. Ken Kaneki is a normal student when a date goes badly and she reveals herself to be a ghoul. Then a freak accident happens, one which he barely survives, and his life changes forever.

Seven chosen mages and their summoned heroic spirit fight against each other to try to win the Holy Grail – a device that can grant any wish. This anime follows the story of Kiritsugu and his summoned spirit, Saber, as they fight in the cutthroat game of survival.

A small subset of powerful knights that were said to have betrayed their homeland and comrades in an attempt to overthrow the ruler was defeated by the Holy Knights of Britannia, but rumors say that they still exist as the Seven Deadly Sins. But the Holy Knights stages a coup and are now the tyrannical leaders. The third princess of the kingdom, Elizabeth, is in search of the Seven Deadly Sins, to take back her kingdom.

Each Magi must choose a worthy candidate to become a king, then helps them conquer strange labyrinths called Dungeons and acquire the power of mythical djinns within. Aladdin is a young Magi wandering the world in search of his true self. In his travels, Aladdin befriends Alibaba Saluja and guides him to a nearby Dungeon.

Asta and Yuno were abandoned at the same church on the same day. Whilst Yuno grew up to be able to wield magic with amazing power and control, Asta cannot use magic at all. However, Yuno is attacked by Lebuty. Asta tries to fight, but he is outmatched. Unleashing his inner emotions in a rage, Asta receives a five-leaf clover Grimoire, a “Black Clover” giving him enough power to defeat Lebuty. Now, Yuno and Asta are ready for the hardest of challenges to achieve their common dream: to be the Wizard King.

In the enchanted Kingdom of Fiore, the lively Lucy Heartfilia has one wish: to join the renowned Fairy Tail Guild. Luckily, a chance encounter with Natsu Dragneel, the “Salamander” of Fairy Tail, whisks her into the legendary guild. Teaming up with Natsu, Gray, and Erza, Lucy finds herself amidst the guild’s most misfit wizards and constantly in the eye of every danger.

Sword Art Online, or “SAO,” offers a VR gateway into the wondrous world of Aincrad. However, the idyllic fantasy rapidly becomes a brutal nightmare when SAO’s creator traps thousands of players inside the game. While Kazuto “Kirito” Kirigaya was fortunate enough to be a beta-tester for the game, he quickly finds that despite his advantages, he cannot overcome SAO’s challenges alone. Teaming up with Asuna Yuuki and other talented players, Kirito makes an effort to face the seemingly insurmountable trials head-on.

Seven chosen mages and their summoned heroic spirit fight against each other to try to win the Holy Grail – a device that can grant any wish. This anime follows the story of Kiritsugu and his summoned spirit, Saber, as they fight in the cutthroat game of survival.

Although one of the later releases in the series, it acts as a prequel so it is a great place to start to introduce you to the Fate series.

Kagome Higurashi’s 15th birthday takes a sudden turn when she is forcefully pulled by a demon into the old well of her family’s shrine. She finds herself persistently hunted by creatures, all yearning for an item she carries: the Shikon Jewel. Kagome encounters a half-demon boy named Inuyasha. After realizing the dire circumstances they are both in, he sets aside his hostility and lends her a hand.

Five years after winning the World Martial Arts tournament, Goku is now living a peaceful life with his wife and son. However, with the arrival of a mysterious enemy named Raditz who presents himself as Goku’s long-lost brother, everything changes. With his failed attempt at forcibly recruiting Goku as an ally, Raditz warns Goku’s friends of a new threat that’s rapidly approaching Earth. One that could plunge Earth into an intergalactic conflict and cause the heavens themselves to shake.

The Four Cardinal Heroes are a group of ordinary men from modern-day Japan summoned to the kingdom of Melromarc to become its saviors. The four heroes are respectively bestowed a sword, spear, bow, and shield. Naofumi Iwatani, an otaku, becomes cursed with the fate of being the “Shield Hero.” When the heroes are provided with resources and comrades to train with, Naofumi sets out with the only person willing to train alongside him, Malty Melromarc.

After accidentally eating a Devil Fruit, which means that his body has gained the property of rubber, Monkey D. Luffy explores the Grand Line in search of the world’s ultimate treasure known as “One Piece” in order to become the next pirate king. He is accompanied by his crew of pirates, named the Straw Hat Pirates.

To the average person, psychic powers may seem like a great gift, but to Saiki they are more of an annoyance. Saiki Kusou wants to be a normal high school student and avoid attention, which is difficult when you’re a super-powerful psychic and situations where you need to use your powers always seem to arise. Inadvertently, he finds himself surrounded by many odd characters and is forced to deal with their craziness through both their spoken words and the thoughts in their head. Saiki soon learns that the ordinary life he wants is more difficult to achieve than expected.

What is a fantasy anime?

Are there any good fantasy anime?

There are many good fantasy animes to watch! Some of our favorites include: Castlevania, Attack on Titan, Jujustu Kaisen, Sword Art Online, Dragon Ball Z, Fairy Tail, Black Clover and more!

What fantasy animes should I watch?

With so many good fantasy animes out there, it can be hard to decide which one to watch next. We’d recommend: The Rising of the Shield Hero, InuYasha, Magi: The Labyrinth of Magic, and the Seven Deadly Sins.

Choosing the #1 anime is always a massive debate. But one of the best – and one of the most popular – is Dragon Ball Z.

Is demon slayer a fantasy anime?

Yes, Demon Slayer is a dark fantasy and adventure anime.

Which of these animes will you be watching next? Let us know! 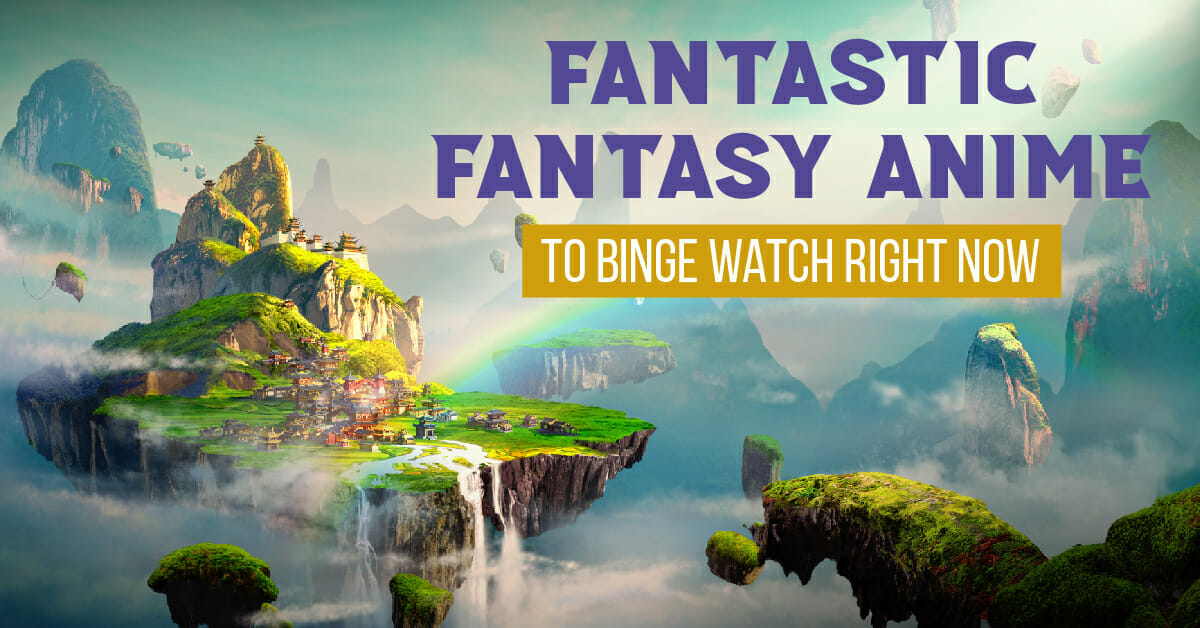