The Hitchhikers Guide To The Galaxy series is one of the best and funniest sci fi series to ever exist! It follows the misadventures of the last surviving man, Arthur Dent, following the demolition of the Earth. Basically, it’s a series that if you haven’t read it, then what have you been doing with your life? And with the upcoming Hulu TV series adaption, what better time is there to start reading other than now! So long, and thanks for all the fish.

The Hitchhiker’s Guide To The Galaxy – Book 1

It’s an ordinary Thursday morning for Arthur Dent . . . until his house gets demolished. The Earth follows shortly after to make way for a new hyperspace express route, and Arthur’s best friend has just announced that he’s an alien. After that, things get much, much worse.

The Restaurant At The End Of The Universe – Book 2

Facing annihilation at the hands of the warlike Vogons? Time for a cup of tea! Join the cosmically displaced Arthur Dent and his uncommon comrades in arms in their desperate search for a place to eat, as they hurtle across space powered by pure improbability.

Life, The Universe And Everything – Book 3

The unhappy inhabitants of planet Krikkit are sick of looking at the night sky above their heads—so they plan to destroy it. The universe, that is. Now only five individuals stand between the killer robots of Krikkit and their goal of total annihilation.

So Long, And Thanks For All The Fish – Book 4

Back on Earth with nothing more to show for his long, strange trip through time and space than a ratty towel and a plastic shopping bag, Arthur Dent is ready to believe that the past eight years were all just a figment of his stressed-out imagination. But a gift-wrapped fishbowl with a cryptic inscription, the mysterious disappearance of Earth’s dolphins, and the discovery of his battered copy of The Hitchhiker’s Guide to the Galaxy all conspire to give Arthur the sneaking suspicion that something otherworldly is indeed going on.

It’s easy to get disheartened when your planet has been blown up and the woman you love has vanished due to a misunderstanding about space/time. However, instead of being disheartened, Arthur Dent makes the terrible mistake of starting to enjoy life a bit—and immediately all hell breaks loose.

And Another Thing – Book 6 (written by Eoin Colfer)

Eight years after the death of its creator, Douglas Adams, the author’s widow, Jane Belson, has given her approval for the project to be continued by the international number one bestselling children’s writer, Eoin Colfer, author of the Artemis Fowl novels. Douglas Adams himself once said, ‘I suspect at some point in the future I will write a sixth Hitchhiker book. Five seems to be a wrong kind of number, six is a better kind of number.’

Do you love The Hitchhikers Guide To The Galaxy Series? Let us know! 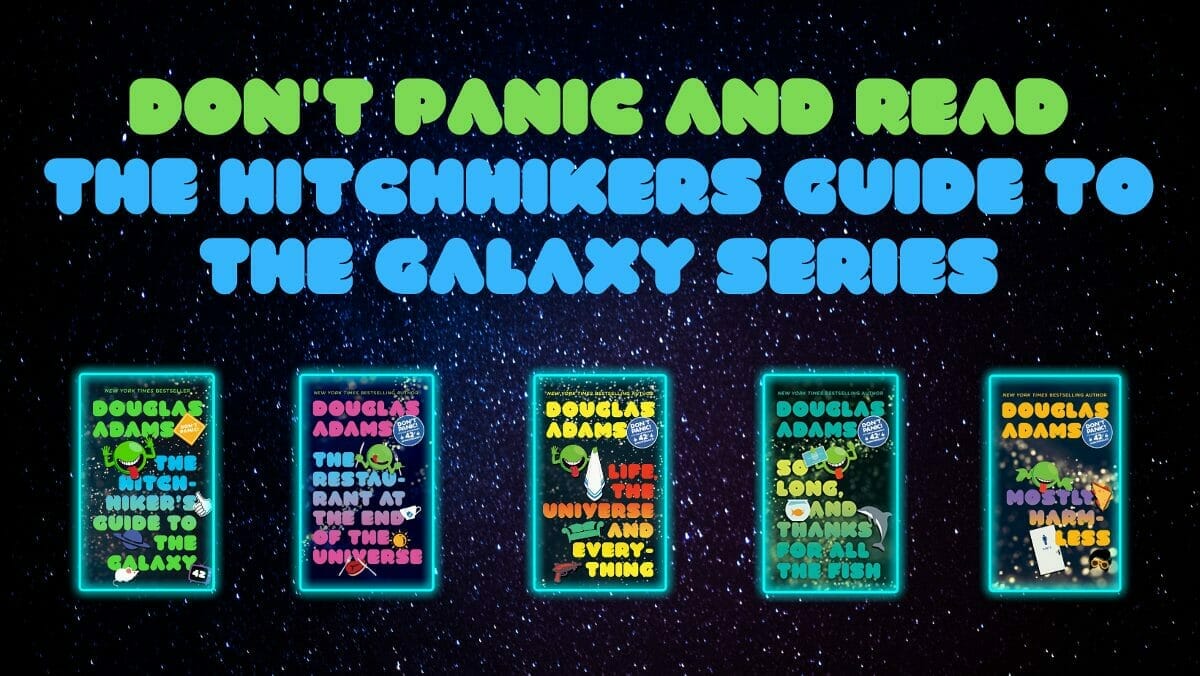