If you are looking for details of Dean Koontz Odd Thomas books in order then we have you covered! Check out everything you need to know about this masterpiece series right here!

The Odd Thomas series started with the first book Odd Thomas, which was published in 2003. The book follows the titular character Odd Thomas, a short order cook who has a unique ability to understand the dead. Upon its release the novel was well received by fans and critics alike and went on to become a New York Times Bestseller. Following the success of the first book six sequels also followed and there was also an Odd Thomas movie made starring the now late Anton Yelchin as Odd Thomas. There are also three graphic novels available – In Odd We Trust, Odd Is On Our Side and House of Odd. And not forgetting the two short novels/short stories – Odd Interlude and Odd Thomas: You Are Destined To Be Together Forever. So read on for more detailed information about every title in this series!

Dean Koontz is the New York Times Bestselling author of the Odd Thomas series, as well as a plethora of other titles – well over 105 novels and novellas are under his belt! In total there have been over 450 million copies of his works sold. Many of his novels have also been adapted into movies, including a movie that was made of Odd Thomas in 2013!

The Odd Thomas Series In Order

The following is the reading order for the Odd Thomas Books (not the publication order):

Odd Thomas – You Are Destined To Be Together

Amid the dizzying rides, tantalizing games of chance, and fanciful attractions of a state fair, two teenage sweethearts on the cusp of life and love’s pleasures find their way to a shadowy carnival tent brimming with curiosities. There, from the bizarre and enthralling Gypsy Mummy, a mechanized merchant of dreams and prognosticator of tomorrows, the young couple learns what fate promises for them. But fate, for Odd Thomas and Stormy Llewellyn, is something altogether different: full of dark corners, sharp edges, and things no seer or soothsayer could ever anticipate.

And for Odd Thomas, a gallant fry cook from a sleepy California desert town, the future beckons—to listen to unquiet spirits, pursue unsettling mysteries, and learn shocking truths . . . for a purpose far greater than himself.

“The dead don’t talk. I don’t know why.” But they do try to communicate, with a short-order cook in a small desert town serving as their reluctant confidant. Sometimes the silent souls who seek out Odd want justice. Occasionally their otherworldly tips help him prevent a crime. But this time it’s different.

A stranger comes to Pico Mundo, accompanied by a horde of hyena-like shades who herald an imminent catastrophe. Aided by his soul mate, Stormy Llewellyn, and an unlikely community of allies that includes the King of Rock ’n’ Roll, Odd will race against time to thwart the gathering evil. His account of these shattering hours, in which past and present, fate and destiny, converge, is a testament by which to live. An unforgettable fable for our time destined to rank among Dean Koontz’s most enduring works.

I see dead people. But then, by God, I do something about it. Odd Thomas never asked for his special ability. He’s just an ordinary guy trying to live a quiet life in the small desert town of Pico Mundo. Yet he feels an obligation to do right by his otherworldly confidants, and that’s why he’s won hearts on both sides of the divide between life and death. But when a childhood friend disappears, Odd discovers something worse than a dead body. And embarks on a heart-stopping battle of will and wits with an enemy of exceptional cunning. In the hours to come there can be no innocent bystanders, and every sacrifice can tip the balance between despair and hope.

Loop me in, odd one. The words, spoken in the deep of night by a sleeping child, chill the young man watching over her. For this was a favorite phrase of Stormy Llewellyn, his lost love. In the haunted halls of the isolated monastery where he had sought peace, Odd Thomas is stalking spirits of an infinitely darker nature.

As he steadfastly journeys toward his mysterious destiny, Odd Thomas has established himself as one of the most beloved and unique fictional heroes of our time. Now, wielding all the power and magic of a master storyteller at the pinnacle of his craft, Dean Koontz follows Odd into a singular new world where he hopes to make a fresh beginning—but where he will meet an adversary as old and inexorable as time itself.

Only a handful of fictional characters are recognized by first name alone. Dean Koontz’s Odd Thomas is one such literary hero, who has come alive in readers’ imaginations as he explores the greatest mysteries of this world and the next with his inimitable wit, heart, and quiet gallantry. Now Koontz follows Odd as he is drawn onward, to a destiny he cannot imagine. Haunted by dreams of an all-encompassing red tide, Odd is pulled inexorably to the sea, to a small California coastal town where nothing is as it seems.

Nestled on a lonely stretch along the Pacific coast, quaint roadside outpost Harmony Corner offers everything a weary traveler needs—a cozy diner, a handy service station, a cluster of cottages . . . and the Harmony family homestead presiding over it all. But when Odd Thomas and company stop to spend the night, they discover that there’s more to this secluded haven than meets the eye—and that between life and death, there is something more frightening than either.

Once presided over by a Roaring ’20s Hollywood mogul, the magnificent West Coast estate known as Roseland now harbors a reclusive billionaire financier and his faithful servants—and their guests. Odd Thomas, the young fry cook who sees the dead and tries to help them, and Annamaria, his inscrutably charming traveling companion. Fresh from a harrowing clash with lethal adversaries, they welcome their host’s hospitality. But Odd’s extraordinary eye for the uncanny detects disturbing secrets that could make Roseland more hell than haven.

Soon enough the house serves up a taste of its terrors, as Odd begins to unravel the darkest mystery of his curious career. What consequences await those who confront evil at its most profound? Odd only knows.

The truck driver is decked out like a rhinestone cowboy. Only instead of a guitar he’s slinging a gun—and Odd Thomas is on the wrong end of the barrel. Though he narrowly dodges a bullet, Odd can’t outrun the shocking vision burned into his mind. Or the destiny that will drive him into a harrowing showdown with absolute evil.

How do you make sure a crime that hasn’t happened yet, never does? That’s the critical question facing Odd Thomas, the young man with a unique ability to commune with restless spirits and help them find justice and peace. But this time, it’s the living who desperately need Odd on their side. Three helpless innocents will be brutally executed unless Odd can intervene in time. Who the potential victims are and where they can be found remain a mystery. The only thing Odd knows for sure is who the killer will be. The homicidal stranger who tried to shoot him dead in a small-town parking lot.

With the ghost of Alfred Hitchcock riding shotgun and a network of unlikely allies providing help along the way, Odd embarks on an interstate game of cat and mouse with his sinister quarry. He will soon learn that his adversary possesses abilities that may surpass his own and operates in service to infinitely more formidable foes, with murder a mere prelude to much deeper designs. Traveling across a landscape haunted by portents of impending catastrophe, Odd will do what he must and go where his path leads him, drawing ever closer to the dark heart of his long journey—and, perhaps, to the bright light beyond.

Odd Thomas is back where it all started. Because the time has come to finish it. Since he left his simple life in the small town of Pico Mundo, California, his journey has taken him to places strange and wonderful, mysterious and terrifying. Across the land, in the company of mortals and spirits alike, he has known kindness and cruelty, felt love and loss, saved lives and taken them—as he’s borne witness to humanity’s greatest good and darkest evil. Again and again, he has gone where he must and done what he had to do. With his courage and devotion sorely tested, and his soul forever changed. Every triumph has been hard won. Each sacrifice has taken its toll.

Now, whatever destiny drives him has finally steered his steps home, where those he cares for most surround him, the memory of his tragically lost true love haunts him, and one last challenge—vast and dreadful—awaits him. For Odd Thomas, born to serve a purpose far greater than himself, the wandering is done. Only the reckoning remains.

How many Odd Thomas books were written?

There were seven Odd Thomas books written (there are also two short novels). The full list is as follows:

Is the Odd Thomas series done?

The Odd Thomas series is complete. There are seven novels and two short novels in the series.

Do you have to read Odd Thomas in order?

The Odd Thomas books do not necessarily have to be read in order but it would be highly recommended to read them in order to experience the story and world building at its best.

How do I read Odd Thomas books?

The best way to read the Odd Thomas books is in the following order:

Is there only one Odd Thomas movie?

Yes, there is only one Odd Thomas Movie. It was released in 2013 and starred Anton Yelchin as Odd Thomas.

What do you think of the Odd Thomas Series – let us know! 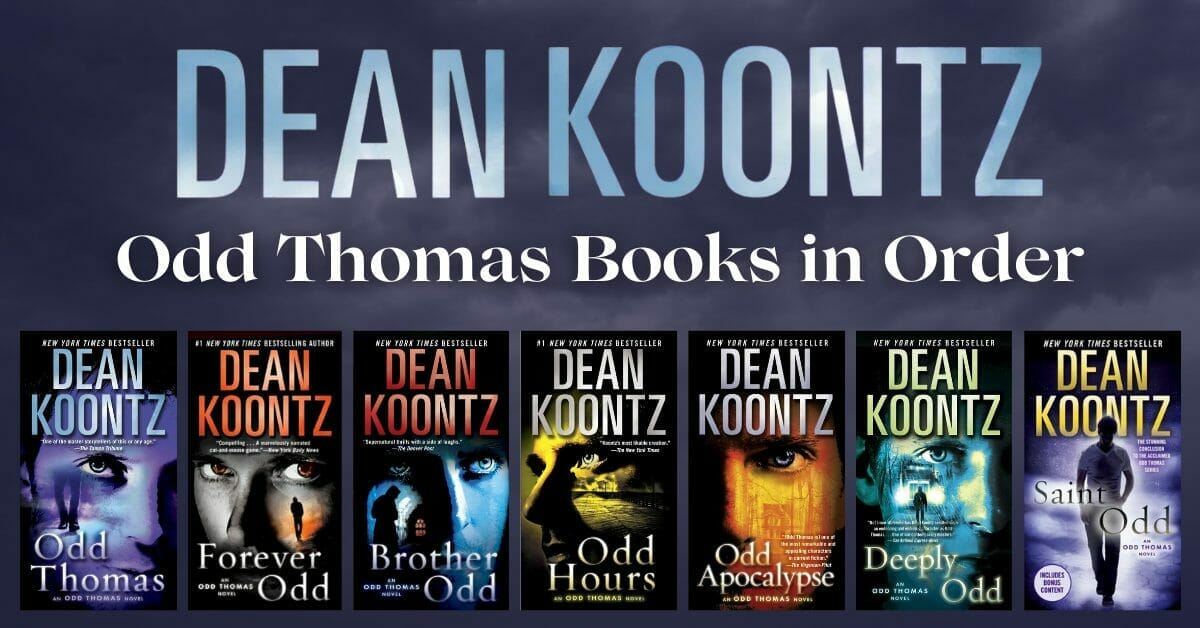