Fantasy is such a vast and amazing genre. So many books can fit under the fantasy umbrella that it can be really hard to decide on what to read next. But if you love teen/young adult books, then we’ve gathered the best fantasy books for teens in one place for you. So, check them out now!

Around the world, black handprints are appearing on doorways, scorched there by winged strangers who have crept through a slit in the sky. In a dark and dusty shop, a devil’s supply of human teeth have grown dangerously low. And in the tangled lanes of Prague, a young art student is about to be caught up in a brutal otherworldly war.

The Gilded Ones – Namina Forna

Sixteen-year-old Deka lives in fear and anticipation of the blood ceremony that will determine whether she will become a member of her village. Already different from everyone else because of her unnatural intuition, Deka prays for red blood so she can finally feel like she belongs. But then, her blood runs gold – the color of impurity – and Deka knows she will face a consequence worse that death.

Scarlett has never left the tiny island where she and her beloved sister, Tella, live with their powerful and cruel father. Now Scarlett’s father has arranged a marriage for her, and Scarlett thinks her dreams of seeing Caraval, a once-a-year performance, are over. But this year, Scarlett’s long-dreamt of invitation arrives.

Kristin Cashore’s bestselling, award-winning fantasy Graceling tells the story of the vulnerable-yet-strong Katsa, a smart, beautiful teenager who lives in a world where selected people are given a Grace, a special talent that can be anything from dancing to swimming. Katsa’s is killing. As the king’s niece, she is forced to use her extreme skills as his thug. Along the way, Katsa must learn to decipher the true nature of her Grace… and how to put it to good use. A thrilling, action-packed fantasy adventure (and steamy romance!) that will resonate deeply with adolescents trying to find their way in the world.

Clary was just a normal girl, until she witnessed a murder at a nightclub and suddenly she’s swept up into the world of Shadowhunters. It’s because of this that she meets Jace and Clary can’t stop herself from falling in love with him, despite the fact that he acts like a jerk.
“Prepare to be hooked” – Entertainment Weekly

Eighteen year old, Gu Miyoung has a secret. She’s a gumiho, a nine tailed fox who must devour the energy of men to survive. With so many evil men who no one will miss, Seoul makes for the perfect hunting ground.

Sophia knows the story. Every young girl does. And they know they only have one chance at the royal ball for choosing. For the lives of those not chosen by a man at the ball are forfeit. But Sophia doesn’t want to be chosen.

One terrible morning, Jude and her sisters see their parents murdered in front of them. Kidnapped by the assassins to the land of the Faeries, Jude is installed in the Royal Court.

Sixteen year old Jacob finds himself on the remote island off the coast of Wales. There’s a crumbled old building, Miss Peregrine’s Home for Peculiar Children. As he explores the ruins, it becomes clear that they were more than peculiar. And that they’re still alive.

An Ember in the Ashes – Sabaa Tahir

Defiance is met with death. Those who do not vow their blood and bodies to the Empire risk the destruction of all they love and hold dear. Laia is a slave and Elias is a soldier, but neither are free.

The villagers require protection off the wizard, but his help comes at a price: one young woman must serve him for ten years. Agnieszka fears that her best friend will be chosen, but it’s not her best friend he chooses.

A dark enchantment blights the land in the award-winning Uprooted – a enthralling fantasy inspired by fairy tales, by Naomi Novik, author of the Temeraire series.

The Name of the Wind – Patrick Rothfuss

The tale of Kvothe, the notorious magician, the accomplished thief, the masterful musician, the dragon-slayer, the legend-hunter, infamous assassin, and unassuming innkeeper.

‘This is a magnificent book’ – Anne McCaffrey

There are no teachers, no holidays, friendships are purely strategic, and the odds of survival are never equal. Once you’re inside, there are only two ways out: you graduate or you die.

Enter a school of magic unlike any you have ever encountered.

Arram Draper is set to be one of the realm’s most powerful mages. With his best friends, Varice and Ozorne, they form a bond that will one day shape the kingdom.

“Tamora Pierce’s books shaped me not only as a young writer but also as a young woman. She is a pillar, an icon, and an inspiration.” – SARAH J. MAAS

Lyra is heading North, where the Gobblers take the children (including her friend) and her fearsome uncle is trying to build a bridge to a parallel world. Lyra knows she needs to act, but to help one is to betray the other.

The modern fantasy classic that Entertainment Weekly named an “All-Time Greatest Novel” and Newsweek hailed as a “Top 100 Book of All Time.”

Sophie is the eldest of three sisters, destined to fail miserably. But she attracts the attention of the Witch of the Waste and finds herself transformed into an old lady. The only person who can break the spell is the wizard Howl.

The unicorn lived in the safety of an enchanted forest, all alone. So she ventured out to find more of her kind, joined by a wizard and Molly Grue.

The Lion, The Witch and the Wardrobe – C. S. Lewis

Four adventurous siblings—Peter, Susan, Edmund, and Lucy Pevensie—step through a wardrobe door and into the land of Narnia, a land frozen in eternal winter and enslaved by the power of the White Witch.

Criminal prodigy Kaz Brekker is offered a chance at a deadly heist that could make him rich beyond his wildest dreams – but he can’t pull it off alone. Six outcasts and one impossible heist.

Nominated for the CILIP Carnegie Medal 2017, this fantasy epic from the No. 1 NEW YORK TIMES bestselling author of the Grisha trilogy is gripping, sweeping and memorable

Zélie remembers when the soil of Orïsha hummed with magic, when three different clans ruled. Everything changed when magic suddenly disappeared. A ruthless king killed everyone who had powers, leaving Zélie without a mother and her people without hope.

Tomi Adeyemi conjures a stunning world of dark magic and danger in her West African-inspired fantasy debut Children of Blood and Bone.

Poor farm boy, Eragon, finds a stone in the forest. It turns out it wasn’t a stone at all when it hatches a dragon. His simple life has changed drastically and now he must take up the mantle of the legendary Dragon Riders.

The fate of the Empire rests in his hands. . .

A Court of Thorns and Roses – Sarah J. Maas

Feyre is a huntress, but killing the wrong wolf changes her life forever. She’s taken away from her family by a man in a jewelled mask named Tamlin. As her feelings for Tamlin turn from hostility to passion, Fayre learns the land of the faerie are much more dangerous than she realized.

“With bits of Buffy, Game Of Thrones and Outlander, this is a glorious series of total joy ” – Stylist

Celaena Sardothien is a beautiful but deadly assassin. When she gets caught in the act, Captain Westfall offers a proposition: represent the Prince in a to-the-death tournament in exchange for her freedom. What she doesn’t expect is to develop feelings for the two men protecting her.

Cinder is a gifted mechanic and a cyborg, she’s reviled by her mother and blamed for her sister’s illness. Then her life becomes intertwined with the handsome Prince Kai and she needs to learn the secrets about her past for the world’s future.

“A mash up of fairy tales and science fiction . . . a cross between Cinderalla, Terminator, and Star Wars.” ― Entertainment Weekly

The Reds are commoners ruled by the Silvers. Mare Barrow is a Red who finds herself working in the Silver Place. There, she discovers that she possesses a deadly power. One that threatens to destroy the balance of power.

THIS IS A WORLD DIVIDED BY BLOOD – RED OR SILVER

To Kill a Kingdom – Alexandra Christo

Princes Lira is siren royalty and the most lethal of them all. But as a punishment for killing one of her own, Lira is transformed into a human. Then she meets Prince Elian, a siren hunter, and she promises him the key to destroying sirens for good.

Dark and romantic YA fantasy about the siren with a taste for royal blood and the prince who has sworn to destroy her.

Did you enjoy any of these fantasy books? Let us know!

If you liked this, then you’ll love Dune The Book Series Frank Herbert’s Sci Fi Masterpiece! 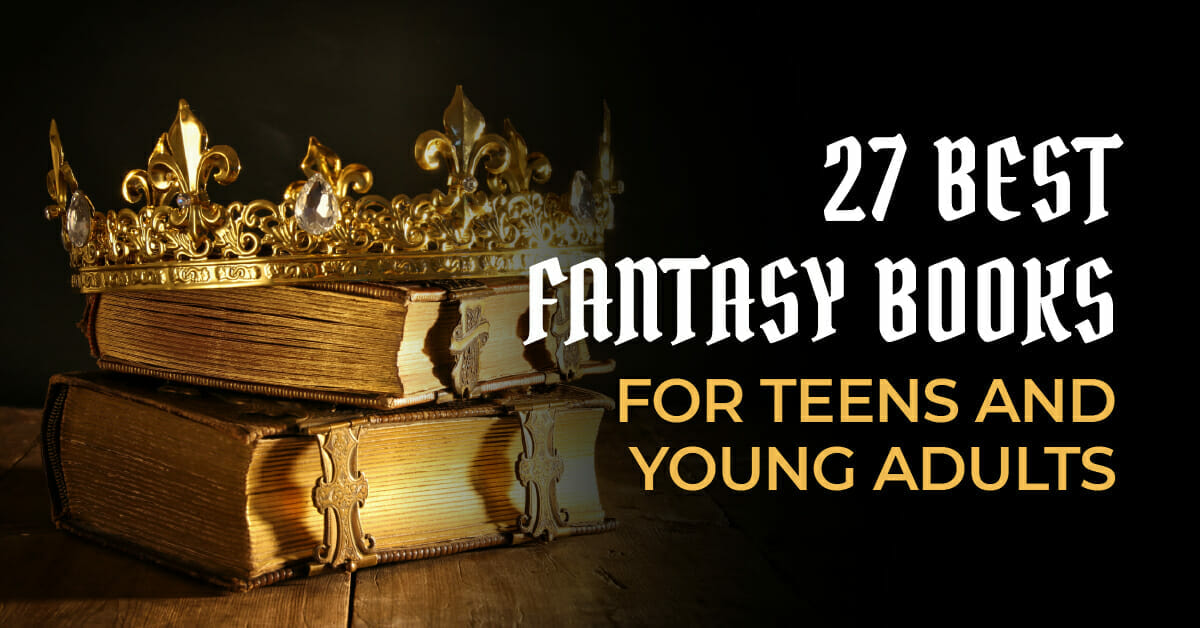