Dune has been in the spotlight recently as the movie – starring Timothée Chalamet, Zendaya, and Jason Momoa – premiered recently. But did you know that Dune actually started out as a book series? Don’t worry though, we’ve got everything you need to know about Frank Herbert’s Dune the book series right here. So, sit back and get lost in the epic world of Dune.

On the desert planet Arrakis, Paul Atreides is heir to a noble family tasked with ruling an inhospitable world. The only thing of value is the ‘spice’ melange, a drug capable of extending life and enhancing consciousness. It’s a prize worth killing for. And when House Atreides is betrayed, the destruction of Paul’s family will set the boy on a journey toward a destiny greater than he could ever have imagined.

Paul Atreides is better known and feared as the man christened Muad’Dib. As Emperor of the known universe, he possesses more power than a single man was ever meant to wield. Worshipped as a religious icon by the fanatical Fremen, Paul faces the enmity of the political houses he displaced when he assumed the throne. And even as House Atreides begins to crumble around him, the true threat to Paul comes to his lover, Chani, and the unborn heir to his family’s dynasty.

The Children of Dune are twin siblings Leto and Ghanima Atreides, whose father, the Emperor Paul Muad’Dib, disappeared in the desert wastelands of Arrakis nine years ago. Like their father, the twins possess supernormal abilities. Thus making them valuable to their manipulative aunt Alia, who rules the Empire in the name of House Atreides. But Alia’s rule is not absolute as she faces treason on two fronts.

Millenia have passed on Arrakis and the once-desert planet is green with life. Leto Atreides is still alive but far from human. To preserve humanity’s future, he sacrificed his own by merging with a sandworm, granting him near immortality as God Emperor of Dune for the past thirty-five hundred years. And his rule is not a benevolent one. A rebellion is rising.

The Empire has fallen into ruin. The great Scattering saw millions abandon the crumbling civilization and spread out beyond the reaches of known space. The planet Arrakis has reverted to its desert climate. Now the Lost Ones are returning home in pursuit of power. A girl named Sheena rises to prominence in the wastelands, sending religious fervor throughout the galaxy.

The remnants of the Old Empire have been consumed by the violent matriarchal cult known as the Honored Matres. Only one faction remains a viable threat to their total conquest – the Bene Gesserit, heirs to Dune’s power.

Do you love Dune the book series as much as we do? Let us know! 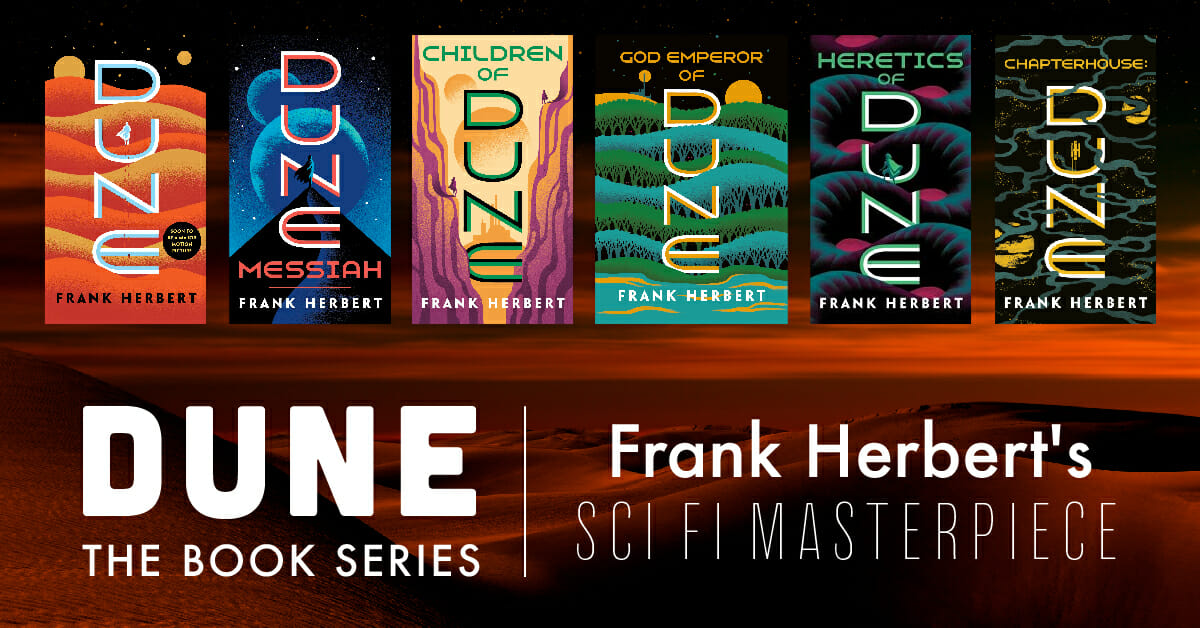