JRR Tolkien’s Lord Of The Rings Books In Order

One of the most iconic and famous fantasy franchises of all time – the Lord of the Rings. If you haven’t seen the movie or read the books, then you’re seriously missing out. So, check out The Lord Of The Rings books in order now!

Lord Of The Rings Books In Order

The series was written by JRR Tolkien in stages between 1937 and 1949, it became one of the best-selling books of all time. What started out as a simple sequel to JRR Tolkien’s 1937 children’s book The Hobbit eventually became much bigger. And true Tolkien fans won’t want to miss out on The Silmarillion, Unfinished Tales Of Numenor And Middle-Earth, The Fall Of Gondolin and The Children Of Húrin that were all edited by Christopher Tolkien and flesh out the history of Middle Earth.

This is the chronological reading order of the Lord Of The Rings series, not the published order.

The Children Of Húrin

The Children of Húrin is the first complete book by Tolkien since the 1977 publication of The Silmarillion. Six thousand years before the One Ring is destroyed, Middle-earth lies under the shadow of the Dark Lord Morgoth. The greatest warriors among elves and men have perished, and all is in darkness and despair. But a deadly new leader rises, Túrin, son of Húrin, and with his grim band of outlaws begins to turn the tide in the war for Middle-earth—awaiting the day he confronts his destiny and the deadly curse laid upon him.

The story of the creation of the world and of the First Age, this is the ancient drama to which the characters in The Lord of the Rings look back and in whose events some of them, such as Elrond and Galadriel, took part. The three Silmarils were jewels created by Fëanor, most gifted of the Elves. Within them was imprisoned the Light of the Two Trees of Valinor before the Trees themselves were destroyed by Morgoth, the first Dark Lord. Thereafter, the unsullied Light of Valinor lived on only in the Silmarils, but they were seized by Morgoth and set in his crown, which was guarded in the impenetrable fortress of Angband in the north of Middle-earth.

The Silmarillion is the history of the rebellion of Fëanor and his kindred against the gods, their exile from Valinor and return to Middle-earth, and their war, hopeless despite all their heroism, against the great Enemy.

Unfinished Tales Of Numenor And Middle-Earth

This is a collection of short-stories published posthumously and edited by Christopher Tolkien.

The book concentrates on the lands of Middle-earth and comprises Gandalf’s lively account of how he came to send the Dwarves to the celebrated party at Bag-End, the story of the emergence of the sea-god Ulmo before the eyes of Tuor on the coast of Beleriand, and an exact description of the military organization of the Riders of Rohan and the journey of the Black Riders during the hunt for the Ring.

Unfinished Tales also contains the only surviving story about the long ages of Númenor before its downfall, and all that is known about the Five Wizards sent to Middle-earth as emissaries of the Valar, about the Seeing Stones known as the Palantiri, and about the legend of Amroth.

The Hobbit: Or There and Back Again

A great modern classic and the prelude to THE LORD OF THE RINGS. Bilbo Baggins is a hobbit who enjoys a comfortable, unambitious life, rarely traveling any farther than his pantry or cellar. But his contentment is disturbed when the wizard Gandalf and a company of dwarves arrive on his doorstep one day to whisk him away on an adventure. They have launched a plot to raid the treasure hoard guarded by Smaug the Magnificent, a large and very dangerous dragon. Bilbo reluctantly joins their quest, unaware that on his journey to the Lonely Mountain he will encounter both a magic ring and a frightening creature known as Gollum.

Sauron, the Dark Lord, has gathered to him all the Rings of Power—the means by which he intends to rule Middle-earth. All he lacks in his plans for dominion is the One Ring—the ring that rules them all—which has fallen into the hands of the hobbit, Bilbo Baggins.

In a sleepy village in the Shire, young Frodo Baggins finds himself faced with an immense task, as his elderly cousin Bilbo entrusts the Ring to his care. Frodo must leave his home and make a perilous journey across Middle-earth to the Cracks of Doom, there to destroy the Ring and foil the Dark Lord in his evil purpose.

Lord Of The Rings The Two Towers

Frodo and his Companions of the Ring have been beset by danger during their quest to prevent the Ruling Ring from falling into the hands of the Dark Lord by destroying it in the Cracks of Doom. They have lost the wizard, Gandalf, in a battle in the Mines of Moria. And Boromir, seduced by the power of the Ring, tried to seize it by force. While Frodo and Sam made their escape, the rest of the company was attacked by Orcs. Now they continue the journey alone down the great River Anduin—alone, that is, save for the mysterious creeping figure that follows wherever they go.

Lord Of The Rings The Return Of The King

The Dark Lord has risen, and as he unleashes hordes of Orcs to conquer all Middle-earth, Frodo and Sam struggle deep into his realm in Mordor.

To defeat Sauron, the One Ring must be destroyed in the fires of Mount Doom. But the way is impossibly hard, and Frodo is weakening. The Ring corrupts all who bear it and Frodo’s time is running out.

Will Sam and Frodo succeed, or will the Dark Lord rule Middle-earth once more?

What is the order of Lord of the Rings books?

The full correct order of the Lord Of The Rings Books is as follows:

How many Lord of the Rings books are there in order?

Here are the Lord Of The Rings books in order:

Should I read LOTR or The Hobbit first?

The best place to start with the Lord Of The Rings is The Hobbit.

Is The Silmarillion part of Lord of the Rings?

Yes, The Silmarillion is part of Lord Of The Rings.

Which Lord of the Rings book should I read first?

The best place to start with the Lord Of The Rings is The Hobbit.

Have you read the Lord of the Rings? Let us know what you think of this amazing series!

If you liked this, then check out The Wheel Of Time Books In Order – Now An Amazon Prime Original Show! 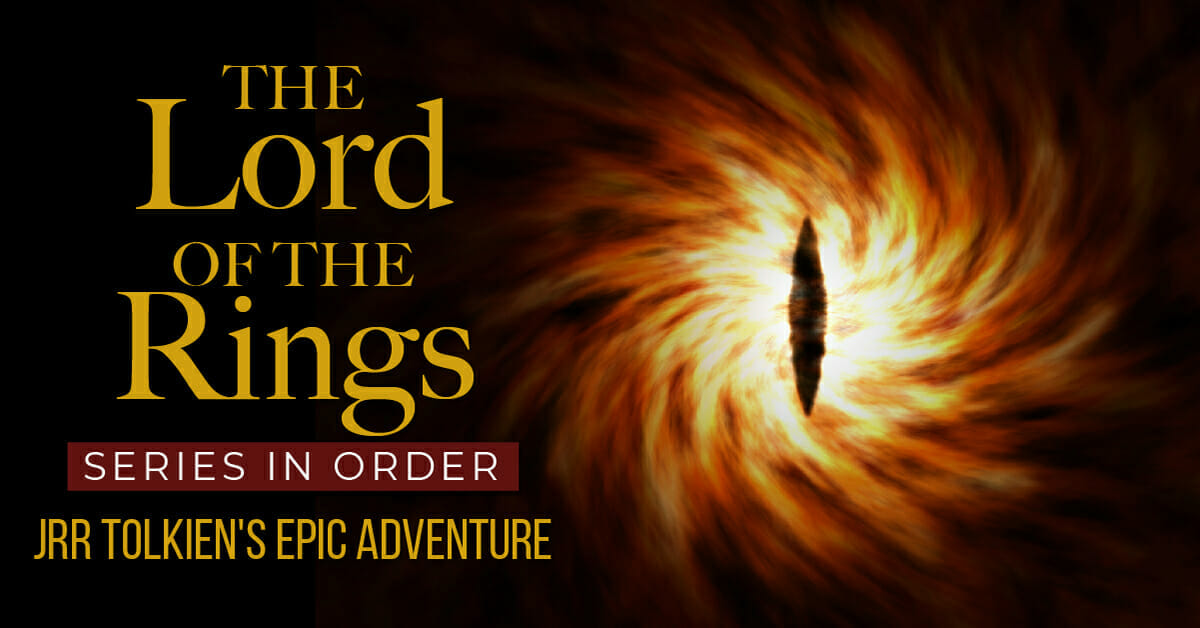