The Wheel Of Time Books In Order – Now An Amazon Prime Show!

Known as one of the most influential and popular high fantasy epics ever published, The Wheel of Time by Robert Jordan – with Brandon Sanderson as a co-author for the final three novels – is a series you don’t want to miss out on. The series sold 90 million copies worldwide, making it one of the best-selling epic fantasy series since The Lord of the Rings. As a result of it’s popularity, there’s been a collectable card game, a video game, a roleplaying game, soundtrack album, and a TV series adaption. But, start where it all began with the books and loose yourself in the world of Rand al’Thor and a battle between good and evil. Read The Wheel of Time books in order now!

Wheel Of Time Books In Order

Set as a prequel 20 years before the first book, the city of Canluum lies close to the scarred and desolate wastes of the Blight. The city greets Al’Lan Mandragoran, exiled king of Malkier and the finest swordsman of his generation. It is within Canluum’s walls that Lan will meet a woman who will shape his destiny.

Rand al’Thor and his friends’ village is attacked, and they’re forced to flee. An ancient evil is stirring and its servants are searching for the hero who can deliver the world from darkness.

Prepare to turn the Wheel of Time – discover the first novel in one of the most influential and popular fantasy epics ever published.

The Forsaken are loose, the Horn of Valere has been found and the Dead are rising from their dreamless sleep. The Prophecies are being fulfilled. But Rand al’Thor, the shepherd the Aes Sedai have proclaimed as the Dragon Reborn, desperately seeks to escape his destiny.

Winter has almost stopped the war. Yet men are dying and calling out for the Dragon. Rand al’Thor travelled to the great fortress, the Stone of Tear. He plans to find the sword Callandor, which can only be wielded by the Champion of Light. Following Rand, Moiraine and their friends battle Darkhounds on the hunt, hoping they reach the Heart of the Stone in time for the next great test.

Accompanied by Moiraine Damodred, Rand arrives at the Aiel Waste and is granted permission by the Wise Ones to enter the sacred city of Rhuidean. After passing through a doorframe ter’angreal, Moiraine gains foresight while the Aiel await Rand’s return, either with both arms marked by dragon symbols, validating his identity as He Who Comes With the Dawn, the Chief of Chiefs of all the Aiel—or to never emerge at all.

The bonds are wards that hold the Great Lord of the Dark are slowly failing, but still his fragile prison holds. The Forsaken, immortal servants of the shadow, weave their snares and tighten their grip upon the realms of men, sure in the knowledge that their master will soon break free.

Rand al’Thor strives to bind the nations of the world to his will, to forge alliances that will fight the advance of the Shadow and to ready the forces of Light for the Last Battle. But there are other powers that seek to command the war against the Dark One.

The war for humanity’s survival has begun. Rand al’Thor has escaped the snares of the White Tower and the first of the rebel Aes Sedai have sworn to follow him. Attacked by the servants of the Dark and threatened by the invading Seanchan, Rand rallies his forces. And he brings battle to bear upon Illian, stronghold of Sammael the Forsaken.

The Path Of Daggers – Book 8

Rand al’Thor has conquered the city of Illian, struck down Sammael the Forsaken and shattered the armies of the invading Seanchan. Nynaeve, Aviendha and Elayne have broken the Dark One’s hold on the world’s weather and are poised to retake the hrone of Andor. And Egwene al’Vere, leader of the exiled Aes Sedai, marches her army to the White Tower.

Rand al’Thor is slowly succumbing to the taint that the Dark One has placed upon the saidin, the male half of the True Source. His Asha’man followers are also showing signs of insanity. And as Rand falters, the Shadow falls across a stricken land.

Fleeing from Ebou Dar with the kidnapped Daughter of the Nine Moons, Mat Cauthon learns that he can neither keep her nor let her go. At Tar Valon, Egwene al’Vere lays siege to the White Tower. Meanwhile, Rand al’Thor must gamble again, with himself at stake.

As the very fabric of reality wears thin, all portents indicate that Tarmon Gai’don, the Last Battle, is imminent. And Rand al’Thor must ready himself to confront the Dark One. But he must first negotiate a truce with the Seanchan armies. But things run off the rails when Lews Therin seizes control of saidin. All is in flux as established powers falter.

The Last Battle looms. And mankind is not ready. Rand al’Thor struggles to unite a fractured network of kingdoms and alliances in preparation. As his allies watch in terror the shadow that seems to be growing within the heart of the Dragon Reborn himself.

The Towers Of Midnight – Book 13

The Last Battle has begun. The seals on the Dark One’s prison are crumbling. The Pattern itself is unravelling, and the armies of the Shadow have begun to spill out of the Blight.

In the Field of Merrilor the rules of the nations gather to join behind Rand al’Thor, or to stop him from his plan to break the seals on the Dark One’s prison. Which is either a sign of his madness or the last hope of humankind. All humanity is in peril. And the outcome with be decided in Shayol Ghul itself. The Wheel is turning and the Age is coming to its end. The Last Battle will determine the fate of the world.

What did you think of the Wheel of Time series? Let us know!

If you liked this, then check out Dune The Book Series Frank Herbert’s Sci Fi Masterpiece!

What order do The Wheel of Time books go in?

The reading order of the Wheel of Time books is as follows: New Spring; The Eye of The World; The Great Hunt; The Dragon Reborn; The Shadow Rising; Fires of Heaven; Lord of Chaos; A Crown of Swords; The Path of Daggers; Winter’s Heart; Crossroads of Twilight; Knife of Dreams; The Gathering Storm; The Towers of Midnight; A Memory of Light.

Do you have to read The Wheel of Time books in order?

Whilst most of the Wheel of Time books should be read in order, the prequel can be read whenever! It is set 20 years before the first novel, but it wasn’t released until later on.

How many books are in The Wheel of Time TV series?

There are a total of 14 books and 1 prequel (which counts as book 0) in the Wheel of Time series!

Should you read The Wheel of Time prequel first?

No! You don’t have to read the Wheel of Time prequel first. The prequel was actually published between Crossroads of Twilight and Knife of Dreams. So, you can read it pretty much whenever! 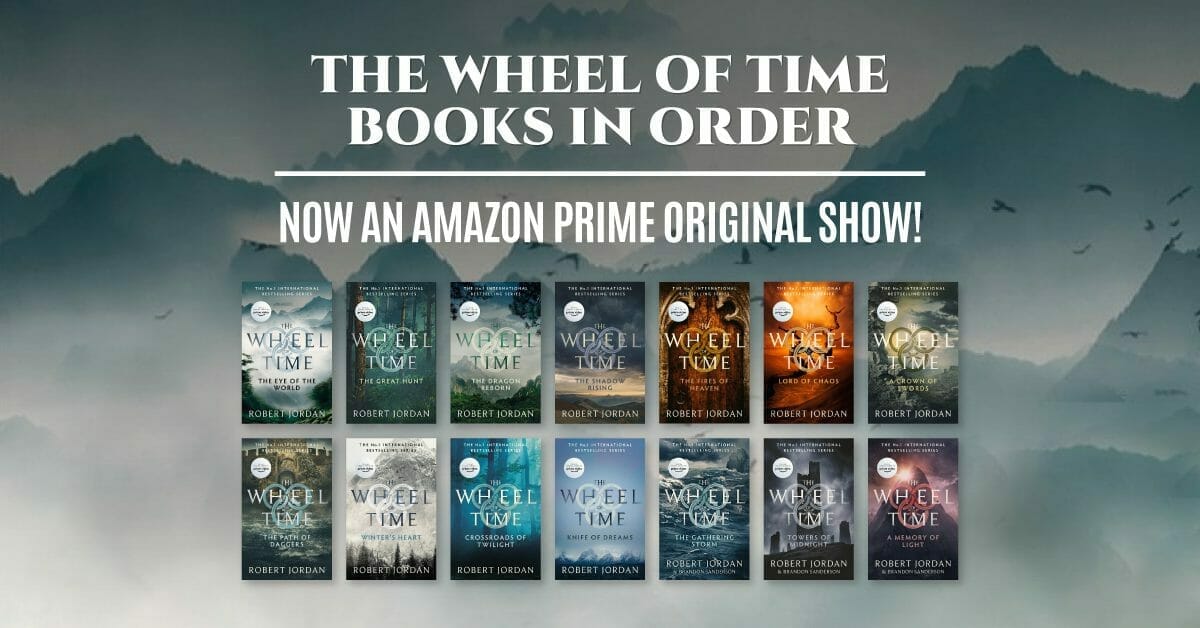