Our Review of The Cruel Prince By Holly Black

For fans of the Cruel Prince (Folk Of Air Series) by Holly Black!  Enter to win a free Folk Of Air 3-Book Boxset by Holly Black AND automatically get 7 additional fantasy novels delivered to your email!

The Cruel Prince is the first installment in a The Folk Of The Air trilogy by Holly Black. The book follows the story of Jude, who is a human changeling, and her twin sister Taryn. The two sisters are sent to live with the faerie royalty where they are to serve as hostages for their parents’ crimes. They quickly learn that there is more than meets the eye with this world and its inhabitants.

The Cruel Prince has been on many best-seller lists since it was published in January 2018. It has been praised by many critics for its originality, writing style, and plot twists. This book has also been promoted as one of the most anticipated books of 2018 by many outlets such as Entertainment Weekly and Buzzfeed News.

About The Cruel Prince

One terrible morning, Jude and her sisters see their parents murdered in front of them. The terrifying assassin abducts all three girls to the world of Faerie, where Jude is installed in the royal court but mocked and tormented by the Faerie royalty for being mortal.

As Jude grows older, she realises that she will need to take part in the dangerous deceptions of the fey to ever truly belong.

But the stairway to power is fraught with shadows and betrayal. And looming over all is the infuriating, arrogant and charismatic Prince Cardan . . .

Enter the dramatic and thrilling world of the Folk of the Air, brimful of magic and romance from New York Times bestselling author Holly Black.

By #1 New York Times bestselling author Holly Black, the first book in a stunning new series about a mortal girl who finds herself caught in a web of royal faerie intrigue.

Of course I want to be like them. They’re beautiful as blades forged in some divine fire. They will live forever.

And Cardan is even more beautiful than the rest. I hate him more than all the others. I hate him so much that sometimes when I look at him, I can hardly breathe.

Jude was seven years old when her parents were murdered and she and her two sisters were stolen away to live in the treacherous High Court of Faerie. Ten years later, Jude wants nothing more than to belong there, despite her mortality. But many of the fey despise humans. Especially Prince Cardan, the youngest and wickedest son of the High King.

To win a place at the Court, she must defy him–and face the consequences.

In doing so, she becomes embroiled in palace intrigues and deceptions, discovering her own capacity for bloodshed. But as civil war threatens to drown the Courts of Faerie in violence, Jude will need to risk her life in a dangerous alliance to save her sisters, and Faerie itself.

The Cruel Prince is a dark, twisted retelling of the fairytale Cinderella. The protagonist is Jude, who is constantly underestimated and underestimated by her stepmother and stepsisters. Jude quickly learns that the world she lives in is far more dangerous than she could have ever imagined, with many secrets hidden beneath the surface. Jude was born mortal and raised in New York City, but after her mother died she found herself living with the immortal faeries who are called The Fair Folk or The High Court. She must learn how to navigate this new world, which includes an arranged marriage that will either lead to glory or heartbreak.

In the first part of the story we meet a seven year old Jude who is living in a suburb in America with her identical twin sister, Taryn, her older sister Vivi and her mother. One day a mysterious man turns up at their house, where the girls see their mother having a tense stand off with the man, who is named Madoc. The man claims to be the father of Vivi and also that he is a faerie from a magical place called Faerie. It unfolds that the girls’ mother was once married to the stranger but she escaped from Faerie with another man, who is the father of the twins. After the tense exchange Madoc ends up killing the girls’ mother and the twins father. He then takes the three girls back with him to the mythical land of Faerie.

Then we have a time skip and we resume the story when Jude is 17, having spent the past ten years growing up in the land of Faerie. Madoc has taken Oriana as another wife and they have a son together who is called Oak. Along with other children from the families of the Faerie King’s Court Jude and Taryn have been attending lessons.

Madoc has been teaching Jude military strategy and the art of combat. To give her and her sisters the protection she feels she has lacked Jude hopes to become a Knight in one of the courts. Jude and her sisters are looked down upon in Faerie due to their mortality and they struggle to fit in. They are tormented in particular by one the of King’s six children, Prince Cardan and his friends. They are often bullied by the arrogant brat Prince Carden but one of his friends, Locke, seems to feel bad for Jude and begins to pay her more attention.

When the King Of Faeries announces that he is stepping down from his throne he tells the folk of Faerie that he will choose one of his children to succeed him. Although Madoc says she isn’t yet ready Jude sees the upcoming tournament as a chance to begin her candidacy to become a Knight. When Jude competes in the tournament anyway this further gains her more unwelcome attention from Prince Cardan and his friends.

The King chooses heir to be Prince Dain, who was impressed by Jude’s performance at the tournament and he asks her to become his spy. It isn’t the Knighthood that Jude was hoping for but she accepts anyway, thinking that the role will still offer her some protection.

Jude’s first mission for Prince Dain which involves a secret letter with details about poisoning. Before long Jude is kept busy with her spy job, taking lessons and also receiving training from Madoc.

Jude and her twin sister Taryn begin to grow distant after Taryn tells Jude that a faerie is going to ask thier father for Taryn’s hand in marriage. Taryn refuses to tell Jude who the secret faeries is and Jude is hurt by her sister’s secrecy and she is also worried that Taryn will end up marrying one of the faeries that Jude hates.

With the distance growing further between the sisters, Jude begins to grow closer to Locke, eventually they end up in a secret relationship. Jude learns that Locke’s mother was poisoned for having a forbidden affair. Meanwhile Jude tries to help free a mortal girl trapped in Faerie but that ends in tragedy. And Prince Cardan continues his bullying of Jude and torments her relentlessly. All of these things make Jude frustrated and the tensions makes Jude kill two beings. One of these is a spy who she finds was working for Madoc, which makes her think that Madoc and Balekin (another of the King’s sons and potential heir to the throne).

On the day of Dain’s coronation a treacherous betrayal takes place and another claim to the throne is made. On the same day Jude also finds out who Taryn’s intended marriage is which cause the twins to end up physically fighting.

The next day Jude gets a secret message from a mechanical golden acorn. The contents of the message changes everything in regards to the heir to the throne. With the danger and threat rising Jude and Carden find themselves in an unlikely alliance where they have to work together. But the recent events have changed the power balance and Jude ends up with an advantage over Carden.

Jude comes up with a plan as to who she wants to see on the throne and crowned the new King of Faerie and she must work together with old enemies to fight new threats. And ultimately decide her own fate and choose to remain in Faerie or return to the mortal world.

The Cruel Prince is a fantastic introduction to The Folk Of The Air series. The Cruel Prince isn’t your typical YA read, it is dark and full of dark, cruel, wicked, twisted characters who do cruel, wicked things. Even Jude isn’t your typical protagonist, she can be ruthless and scheming. In some senses she is almost an anti-heroine. With backstory we are shown why these people act like they do. So be prepared to end up liking some of the characters, despite some of the things they do. Even Madoc doesn’t end up feeling like a monster, despite what we saw him do in one of the very first scenes.

The world building is solid, and there is plenty of politics, action and the romance is there but it bubbles away below the surface, making this book a far from fantasy romance.

It’s about half way through when this book really picks up and has us steam-rolling forward and things get epic! So if you like your fantasy dark with light (of the darkest kind) romance, politics, scheming, betrayals then give The Cruel Prince a worthy read.

Is there LGBT in The Cruel Prince?

Yes, there is LGBT in The Cruel Prince. There is gay, bisexual and trans representation throughout the novels.

Is Cruel Prince an enemy to lovers?

Yes, the Cruel Prince does feature a slow-burn enemies to lovers romance.

Will The Cruel Prince be a movie?

Whilst not much is known yet, back in 2017, Universal won the screen rights to the movie. So, there’s definitely potential for The Cruel Prince to become a movie soon!

Is The Cruel Prince a good book?

In our opinion, yes, The Cruel Prince is a really good book. It isn’t your typical YA read, it is dark and full of dark, cruel, wicked, twisted characters who do cruel, wicked things. So if you like your fantasy dark with light (of the darkest kind) romance, politics, scheming, betrayals then give The Cruel Prince a worthy read.

Is The Cruel Prince about romance?

Whilst the main genre of The Cruel Prince is fantasy, there is still some romance in there! So, if you like your fantasy with a bit of romance, then this series will be perfect.

Can the Cruel Prince be read as a stand alone?

Whilst you can read it as a stand alone, it’s best enjoyed as a series. So you can learn the full story about what happens to Jude in the Faerie land. 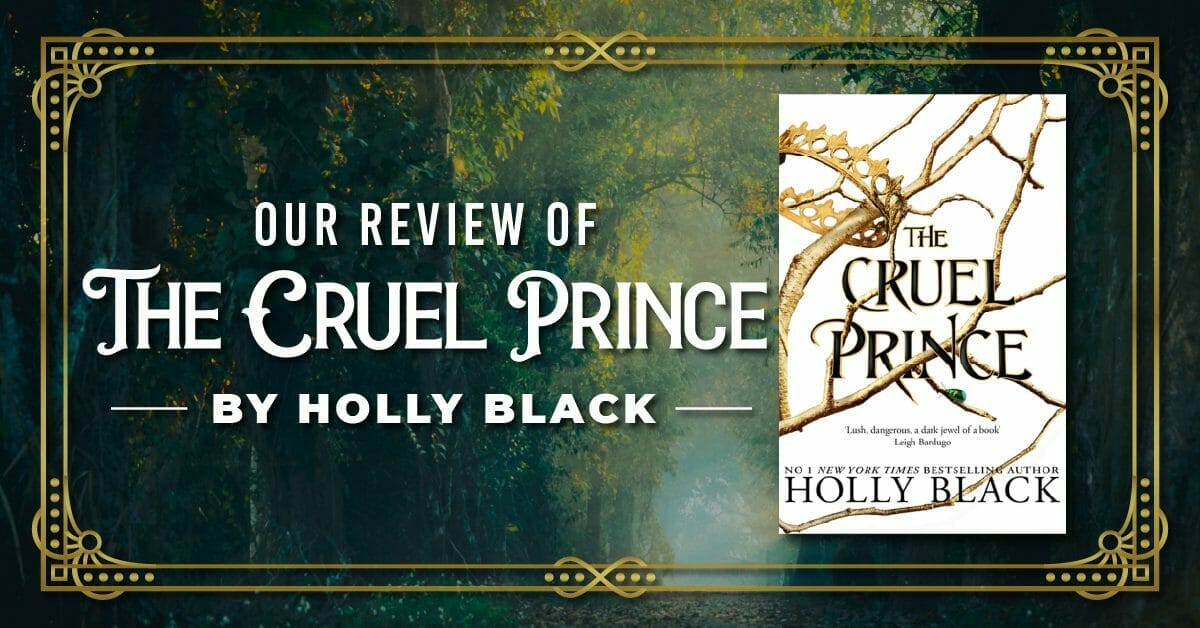