25 Sci Fi Netflix Movies To Transport You To Another World

With the vast amount of choice available on Netflix, it’s hard to distinguish between what you should stream or what you should skip. And if you’re a sci fi lover, then there are plenty of sci fi movies on Netflix for you. But we’ve picked out the best of the bunch. The top 25 sci fi Netflix movies are right here, so get ready to stream right now!

Two astronomers go on a media tour to warn humankind of a planet-killing comet hurtling toward Earth. The response from a distracted world: Meh.

This big budget Netflix Original is a must watch commentary on modern times. Amazing performances from Leonardo DiCaprio and Jennifer Lawrence. Definitely makes you think that something like this could really happen!

After waking up in a cryogenic unit, Liz fights to survive and remember who she is before her oxygen runs out.

This is a French language sci fi thriller with Anne Hathaway serving as a producer. It is a claustrophobic white knuckle thriller that premiered on Netflix in May of last year. With the majority of reviews being favorable this is definitely one to stream!

A three-person crew on a mission to Mars faces an impossible choice when an unplanned passenger jeopardizes the lives of everyone on board.

This movie is a thoughtful take on a very difficult dilemma which has been praised for it’s acting performances. Check this one out for sure!

After a global event wipes out humanity’s ability to sleep, a troubled ex-soldier fights to save her family as society and her mind spiral into chaos.

This movie premiered on Netflix in June last year and reached number one worldwide in the week of it’s release. Even so, this disaster movie didn’t receive the best reviews but it is still worth a watch!

In the aftermath of a global catastrophe, a lone scientist in the Arctic races to contact a crew of astronauts with a warning not to return to Earth.

This movie is based on the book Good Morning, Midnight by Lily Brooks-Dalton. It was named one of the top ten best movies of 2020 by National Board of Review. For the first five days after it’s release it was Netflix’s most watched movie and it stayed in the top ten for the first twelve days afterwards. So join the other 72 million households that watched this movie and catch it now!

Worried about his pregnant fiancée amid a sudden cataclysm, a young lawyer embarks on a dangerous road trip west with his future father-in-law.

Another straight to Netflix release this sci fi action thriller didn’t receive the best reviews but the cast put in a stellar performance so it’s worth a shot!

Plagued by dreams of an alien invasion, a family man faces his worst nightmare when an extraterrestrial force begins exterminating Earth’s inhabitants.

This movie was originally scheduled for a theatrical release but it was pulled at the last minute and Netflix scooped up the rights. This is an alien invasion movie that is worth a stream.

In the near future, a drone pilot sent into a war zone finds himself paired with a top-secret android officer on a mission to stop a nuclear attack.

The futuristic action thriller was first released direct to Netflix in January 2021 and it was the most watched movie on the platform on it’s opening weekend. Don’t miss this one!

A Philadelphia detective slowly unravels as he nurses a lifelong obsession with an enigmatic female serial killer whose crimes defy explanation.

This is a sci fi thriller that you don’t want to miss!

As a young scientist searches for a way to save a dying Earth, she finds a connection with a man who’s racing to catch the last shuttle off the planet.

This post-apocalyptic thriller set features a bees – what more could you ask for – sci fi and bees!

Chasing after space debris and faraway dreams in year 2092, four misfits unearth explosive secrets during the attempted trade of a wide-eyed humanoid.

This is a Korean movie, the theme is heavy on the criticism of capitalism. But despite the serious theme Robot Bubs brings some lightheartedness this can also be something of a fun watch. On it’s release this movie debuted at number one on Netflix in 16 countries and it dominated the top tens in over 80 countries. This is one you definitely don’t want to miss!

A slab of food descends floor by floor in a prison. The inmates above eat heartily, leaving those below starving and desperate. A rebellion is imminent.

This is a Spanish language social science fiction horror film. Reviews have been very favourable and has been described as an inventive and captivating dystopian thriller. So if you fancy something a little different give this one a try!

Orbiting above a planet on the brink of war, scientists test a device to solve an energy crisis and end up face-to-face with a dark alternate reality.

This sci fi horror is the third movie in the Cloverfield franchise. But in space. The film hasn’t received the best of reviews compared to the first two movies in the series but if you want to continue the Cloverfield story then stream this one!

In 1984, a young programmer begins to question reality as he adapts a dark fantasy novel into a video game. A mind-bending tale with multiple endings.

This is an interactive sci fi film from the Blackmirror anthology series, written by creator Charlie Broker. As well as being sci fi this movie also incorporates elements of horror and comedy. The film was a hit with critics, although these has been some criticism. The movie has been nominated for and won a huge numbers of film awards so whether you have seen anything in the Blackmirror series or not this is still definitely worth a watch!

In a future with a strict one-child policy, six septuplets must avoid government detection while searching for their missing sister.

This is a dystopian sci fi action thriller which is at times a little on the silly side it is considered likely to end up as a cult classic movie. So catch it now, before the crowd!

Following humanity’s mass extinction, a teen raised alone by a maternal droid finds her entire world shaken when she encounters another human.

After it’s premiere at the Sundance Film Festival Netflix acquired the streams rights to this sci fi thriller. It is a tense and intriguing movie that has been praised, especially for it’s acting. Definitely one not to miss!

When his girlfriend vanishes, a mute man ventures into a near-future Berlin’s seamy underworld, where his actions speak louder than words.

This is a neo noir science fiction film directed by Duncan Jones. The movie is worth watching for the score alone, composed by Clint Mansell, even if the critics haven’t been too kind!

An ex-soldier, a teen and a cop collide in New Orleans as they hunt for the source behind a dangerous new pill that grants users temporary superpowers.

This one is a futuristic superhero movie that was released straight to Netflix in August 2020. For the first two weekends after it’s premiere it was the top streamed movie on Netflix. With critics praising the acting this is a fun thriller that is worth a stream!

A chainsaw-wielding George Washington teams with beer-loving bro Sam Adams to take down the Brits in a tongue-in-cheek riff on the American Revolution.

This is an adult animated sci fi comedy which is a Netflix original movie. It is something of a controversial movie which opinions divided but if you are looking for something more lighthearted then this may be your thing!

Kidnapped by an inventor who uses her as a test subject to perfect his robotic AI, a street-smart young woman tries to escape her high-tech prison.

This is a sci fi thriller Netflix original starring Gary Oldman as Tau.

Stranded at a summer camp when aliens attack the planet, four teens with nothing in common embark on a perilous mission to save the world.

This sci fi adventure movie is a modern take on the 80s kid centered action films. Although it may fall short of some of the 80s classics it is still worth a watch!

With the world under attack by deadly creatures who hunt by sound, a teen and her family seek refuge outside the city and encounter a mysterious cult.

This is a sci fi horror based on the book of the same name from Tim Lebbon. It has been compared to 2018 movie A Quiet Place so if you enjoyed that movie then catch this one too!

A gentle giant and the girl who raised her are caught in the crossfire between animal activism, corporate greed and scientific ethics.

This is an action adventure film directed by Parasite director Bong Joon Ho. This movie has garnered huge critical acclaim and was named New York Times’s ten most influential films of the decade in November 2019. Definitely one not to miss!

In a future where technology has rendered privacy obsolete, a detective investigates a serial assassin who has been deleted from all visual records.

This is a sci fi thriller which has been described as slightly predictable but if you’ve exhausted everything else on this list then go for it!

On a bleak future Earth, a soldier endures a radical genetic transformation to save humanity. But his wife fears he’s becoming more creature than man.

This is a futuristic dystopian thriller from Netflix about colonizing the moon. While not critically lauded it’s still worth a shot!

Which sci fi Netflix movies are your favorite? Let us know!

If you liked this then check out, New Sci Fi Movies Set To Launch In 2022! 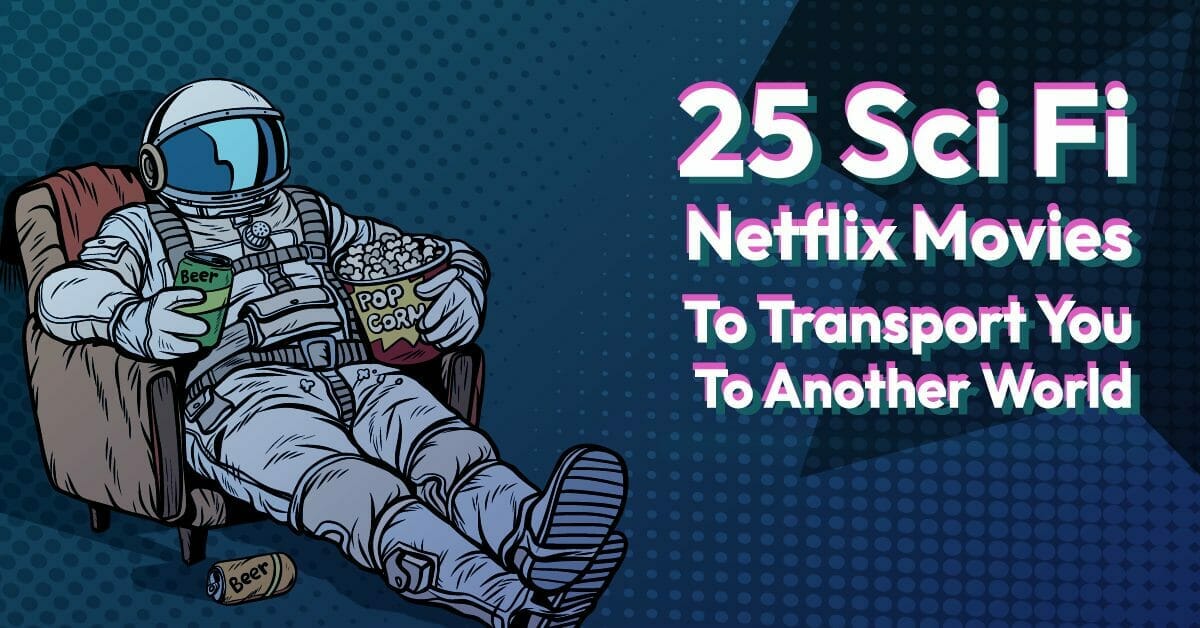