Ultimate Guide To Malazan Book Of The Fallen

Malazan Book Of The Fallen is an epic fantasy series from author Steven Erikson. Check out everything you need to know about this amazing series with our guide right here!

It is a series of epic fantasy novels written by the Canadian author Steven Erikson. There are ten books in the series. It kicks off with Gardens of the Moon and concludes with The Crippled God. The series is very complex with a wide scope and presents the narratives of a large cast of characters spanning thousands of years across multiple continents.

The plot presents a complicated series of events in the world upon which the Malazan Empire is located. Each of the first five novels is relatively self-contained, in that each resolves its respective primary conflict; but many underlying characters and events are interwoven throughout the works of the series, binding it together. The series has received widespread critical acclaim. Reviewers praise the epic scope, plot complexity, and characterizations. This series is definitely well worth a read. So, check out our guide to the series here!

Reviews for The Series

“Erikson is an extraordinary writer. My advice to anyone who might listen to me is, Treat yourself to Gardens of the Moon. And my entirely selfish advice to Steven Erikson is, write faster.”
–Stephen R. Donaldson

“I stand slack-jawed in awe of The Malazan Book of the Fallen. This masterwork of imagination may be the high water mark of epic fantasy. This marathon of ambition has a depth and breadth and sense of vast reaches of inimical time unlike anything else available today. The Black Company, Zelazny’s Amber, Vance’s Dying Earth, and other mighty drumbeats are but foreshadowings of this dark dragon’s hoard.”
–Glen Cook

“A world that is both absorbing on a human level and full of magical sublimity… a wonderfully grand conception …splendidly written… fiendishly readable.”
— Adam Roberts

“Erikson’s strengths are his grown up characters and his ability to create a world every bit as intricate and messy as our own.”
— J.V. Jones

“Rare is the writer who so fluidly combines a sense of mythic power and depth of world, with fully realized characters and thrilling action, but Steven Erikson manages it spectacularly.”
— Michael A. Stackpole

Gardens of the Moon – Book 1

The Malazan Empire simmers with discontent, bled dry by interminable warfare, bitter infighting, and bloody confrontations with the formidable Anomander Rake and his Tiste Andii, ancient and implacable sorcerers. Even the imperial legions yearn for some respite. Yet Empress Laseen’s rule remains absolute. Darujhistan, the last of the Free Cities of Genabackis, holds out. It is to this ancient citadel that Laseen turns her predatory gaze.

In the vast dominion of Seven Cities, in the Holy Desert Raraku, the seer Sha’ik and her followers prepare for the long-prophesied uprising known as the Whirlwind. Unprecedented in size and savagery, this maelstrom of fanaticism and bloodlust will embroil the Malazan Empire in one of the bloodiest conflicts it has ever known, shaping destinies and giving birth to legends.

The ravaged continent of Genabackis has given birth to a terrifying new empire: the Pannion Domin. Like a tide of corrupted blood, it seethes across the land devouring all. In it’s path stands an uneasy alliance: Onearms’s army and Whiskeyjack’s Bridgeburners, alongside their enemies of old – the forces of the Warlord Caladan Brood, Anomander Rake and his Tiste Andii mages, and the Rhivi people of the plains. But ancient undead clans are also gathering. It seems that something altogether darker and more malign threatens this world.

In Northern Genabackis, a raiding party of savage tribal warriors descends from the mountains into the southern flatlands. Their intention is to wreak havoc amongst the despised lowlanders, but for the one named Karsa Orlong, it marks the beginning of what will prove to be an extraordinary destiny.

Some years later, it is the aftermath of the Chain of Dogs. Tavore, the Adjunct to the Empress, has arrived in the last remaining Malazan stronghold of Seven Cities. New to command, she must hone twelve thousand soldiers, mostly raw recruits but for a handful of veterans of Coltaine’s legendary march, into a force capable of challenging the massed hordes of Sha’ik’s Whirlwind who lie in wait in the heart of the Holy Desert.

After decades of internecine warfare, the tribes of the Tiste Edur have at last united under the Warlock King of the Hiroth. There is peace, but at a terrible price. A pact made with a hidden power whose motives are suspect and deadly. To the south, the expansionist kingdom of Lether has enslaved all its less-civilized neighbors with rapacious hunger. All save one – Tiste Edur. And it’s only a matter of time before they fall too. Or so destiny has decreed.

In the ever decimating Malazan Empire, a war is brewing between mortals and immortals, gods and mages. This war will decide once and for all who shall exist and who shall perish.

All is not well in the Letherii Empire. Rhulad Sengar, the Emperor of a Thousand Deaths, spirals into madness. He’s surrounded by sycophants and agents of his Machiavellian chancellor. Meanwhile, the secret police are conducting a campaign of terror against their own people. Conspiracies seethe throughout the palace as the empire edges closer to an all-out war.

Toll Of The Hounds – Book 8

In the city of blue fire, Darujhistan, it is said that love and death shall arrive dancing. It is summer and the heat is oppressive, but for the small man in the faded red waistcoat, discomfiture is not just because of the sun. Dire portents plague his nights and haunt the city streets. Meanwhile, hidden hands pluck the strings of tyranny like a fell chorus. It seems that love and death are indeed about to arrive.

In Letherii, the exiled Malazan army commanded by Adjunct Tavore begins its march into the eastern Wastelands, to fight for an unknown cause against an enemy it has never seen. So this last great army of the Malazan Empire is resolved to make one final defiant, heroic stand in the name of redemption.

Destines are rarely simple, truths never clear but one certainty is that time is on no one’s side. For the Deck of Dragons has been read, unleashing a dread power that none can comprehend…

Savaged by the K’Chain Nah’Ruk, the Bonehunters march for Kolanse, where wait for an unknown fate. Tormented by questions, the army totters on the edge of mutiny, but Adjunct Tavore will not relent. One final act remains – if it is in her power – if she can hold her army together – if the shaky alliances she has forged can survive all that is to come.

Other Books In The Malazan World

The Kharkanas Trilogy is a prequel that was written by Steven Ericson after the completion of the main series. Many of the Tiste characters from the main series appear, such as Anomander Rake, Draconus, Spinnock Durav and Andarist. The series tells of what happened with the Tiste before their split in to darkness, light and shadow. There are currently two books in the series – Forge Of Darkness and Fall Of Light. A third book in the trilogy is in progress.

The Tales of Bauchelain and Korbal Broach

This is a series of novellas in the Malazan world. The novellas are Blood Follows, The Healthy Dead, The Lees of Laughter’s End, Crack’d Pot Trail, The Wurms of Blearmouth, The Fiends of Nightmaria and Upon a Dark of Evil Overlords.

Set in the world of Malazan this a prequel trilogy that is written by Ian Cameron Esslemont. These books tell the of the early adventures of Dancer and Kellanved. There are currently three books in the series – Dancer’s Lament, Deadhouse Landing and Kellanved’s Reach. A fourth book titled Forge Of The High Mage is in progress.

Novels of the Malazan Empire

This is another series written by Ian Cameron Esslemont but the events happen at the same time as the main Malazan series. There are six books in this series – Night of Knives, Return of the Crimson Guard, Stonewielder, Orb Sceptre Throne, Blood and Bone and Assail.

This is a planned trilogy written by Steven Ericson. It is a sequel to the main Malazan series and features Karsa Orlong. There is currently one book published (The God Is Not Willing) and two more books are planned.

How do I read Malazan Book of the Fallen?

The reading order for Malazan Book Of The Fallen is the same as the publication order so the recommended reading order is as follows:

How long is Malazan Book of the Fallen?

Malazan Book Of The Fallen is ten books long and the book order is as follows:

We hope you enjoyed discovering the this epic fantasy series. Let us know what you think of the series!

If you liked this, then you may also like Order Of The Witcher Books That Inspire The Netflix Show! 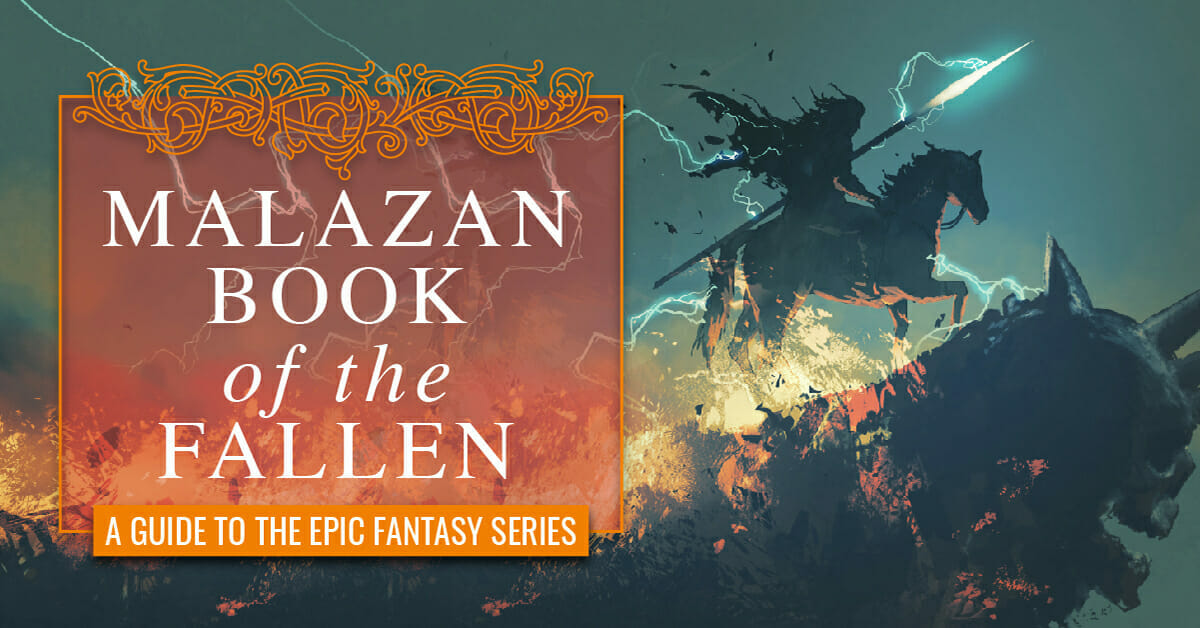