When he was nine, he watched his mother and brother be killed before him. By the time he was thirteen, he was the leader of a band of bloodthirsty thugs. By fifteen, he intends to be king. It’s time for Prince Honorous Jorg Ancrath to return to the castle he turned his back on, to take what’s rightfully his.

Darkness wars with darkness as the hard-bitten men of the Black Company take their pay and do what they must. They bury their doubts with their dead. Then comes the prophecy: The White Rose has been reborn, somewhere, to embody good once more.

For hundreds of years the demons have terrorized the night, slowly culling the human herd that shelters behind magical wards. Night by night the demons grow stronger, while human numbers dwindle. Now, three young survivors will dare the impossible.

When Coraline steps through a door to find another house strangely similar to her own (only better), things seem marvelous. But there’s another mother there, and another father, and they want her to stay and be their little girl. They want to change her and never let her go. Coraline will have to fight with all her wit and courage if she is to save herself and return to her ordinary life.

Way Of The Shadows – Brent Weeks

For Durzo Blint, assassination is an art. And he is the city’s most accomplished artist. For Azoth, survival is precarious. Something you never take for granted. As a guild rat, he’s grown up in the slums, and learned to judge people quickly and to take risks. Risks like apprenticing himself to Durzo Blint.

She is the last hope of good in the war against the evil sorceress known as the Lady. From a secret base on the Plains of Fear, the Black Company, now fights to bring victory to the White Rose. But an even greater evil threatens the world. All the great battles that have gone before will seem a skirmishes when the Dominator rises from the grave.

Isolde de Lara considers her wedding day to be her death day. To end a years-long war, she is to marry the vampire king Adrian Aleksandr Vasiliev. And kill him. But her assassination attempt is thwarted. And if she tries again, he will raise her as the undead.

An orphan’s life is harsh in the mysterious island city of Camorr. But young Locke Lamora dodges death and slavery. He becomes a thief under the tutelage of a gifted con artist. As leader of the band of light-fingered brothers, Locke is soon infamous, fooling even the underworld’s most feared ruler. But in the shadows lurks someone still more ambitious and deadly.

Over a millennium ago, Erna, a seismically active yet beautiful world was settled by colonists from far-distant Earth. But the seemingly habitable planet was fraught with perils no one could have foretold. The colonists found themselves caught in a desperate battle for survival against the fae.

The Darkness That Comes Before – R Scott Bakker

A world scarred by an apocalyptic past – evoking a time both two thousand years past and two thousand years into the future, as untold thousands gather for a crusade. Among them, two men and two women are ensnared by a mysterious traveler, Anasûrimbor Kellhus, from lands long thought dead.

A dark lord will rise. Such is the prophecy that dogs Ringil Eskiath. He’s a washed-up mercenary and onetime war hero whose cynicism is surpassed only by the speed of his sword. When his mother enlists his help in freeing a cousin sold into slavery, Gil sets out to track her down. But it soon becomes apparent that more is at stake than the fate of one young woman.

The Wisdom Of Crowds – Joe Abercrombie

Some say that to change the world you must first burn it down. Now that belief will be tested in the crucible of revolution: the Breakers and Burners have seized the levers of power, the smoke of riots has replaced the smog of industry, and all must submit to the wisdom of crowds.

With nothing left to lose, Citizen Brock is determined to become a new hero for the new age, while Citizeness Savine must turn her talents from profit to survival before she can claw her way to redemption. Orso will find that when the world is turned upside down, no one is lower than a monarch. And in the bloody North, Rikke and her fragile Protectorate are running out of allies . . . while Black Calder gathers his forces and plots his vengeance.

The banks have fallen, the sun of the Union has been torn down, and in the darkness behind the scenes, the threads of the Weaver’s ruthless plan are slowly being drawn together . . .

Haunted by the pain of his past, and plagued by nightmares of the atrocities he has committed, King Jorg is filled with rage. And even as his need for revenge continues to consume him, an overwhelming enemy force marches on his castle.

The Vagrant is his name. He has no other. Years have passed since humanity’s destruction emerged from the Breach. Friendless and alone he walks across a desolate, war-torn landscape. His purpose is to reach the Shining City, last bastion of the human race, and deliver the only weapon that may make a difference in the ongoing war.

Weaveworld begins with a rug into which a world has been woven. It is the world of the Seerkind, a people more ancient than man, who possess the power to make magic. In the last century they were hunted down by an unspeakable horror known as the Scourge. And they worked their strongest raptures to weave themselves and their culture into a rug for safekeeping. Since then, the rug has been guarded by human caretakers. But the last of the caretakers has just died.

Richard Mayhew is a young London businessman with a good heart and ordinary life. Until he discovers a girl bleeding on the sidewalk. He helps her. But it’s an act of kindness that plunges him into a world he never dreamed existed.

When Rin aced the Keju – the test to find the most talented youth to learn at the Academic – it was a shock to everyone. Even to Rin herself, who realized she was finally free of the servitude and despair that had made up her daily existence. That she got into Sinegard – the most elite military school in Nikan – was even more surprising. But surprises aren’t always good.

Sent to a boarding school in Ancelstierre as a young child, Sabriel has had little experience with the random power of Free Magic or the Dead who refuse to stay dead. But during her final semester, her father does missing. And Sabriel knows she must enter the dangerous Old Kingdom to find him.

The prequel and first book in the Witcher series that inspired the bestselling games and Netflix show starring Henry Cavill.

The Last Wish is the perfect introduction to this one-of-a-kind fantasy world.

There are three houses with their own kings and queens – House Stark, House Lannister, and House Targaryen – that all are struggling for control of the throne. The book that inspired the acclaimed HBO series.

Shadow Moon is released from prison, but hours before his release his wife is killed in a freak accident. Then, he meets Shadow an enigmatic stranger who claims to be an ancient god.

Roland is on an epic journey to the mysterious Dark Tower as he pursues the man in black. Now a major motion picture.

The man in black fled across the desert, and the gunslinger followed.

Gardens of the Moon – Steven Erikson

Empires and imperial legions are pitted against each other. But they are not alone, sinister forces gathering as the gods themselves prepare to intervene.

A novel in which grand design, a dark and complex mythology, wild and wayward magic and a host of enduring characters combine with thrilling, powerful storytelling to resounding effect.

Young Fitz is the bastard son of the noble Prince Chivalry, hidden from the world and raised by his father’s stableman. All the royalty treats him as an outcast, except King Shrewd, who secretly taught him the arts of an assassin.

“Fantasy as it ought to be written” – George R. R. Martin

The Blade Itself – Joe Abercrombie

An inquisitor, a nobleman, and an infamous warrior are about to have their lives made more difficult by a bald old man, who might be the First of the Magi.

Alina Starkov is a soldier who knows she may not survive her first battle. But she has a dormant magic inside of her that she didn’t know about.

Which dark fantasy books are your fave? Let us know!

If you liked this, then check out 20 Fantasy Books Series To Take You On Any Adventure! 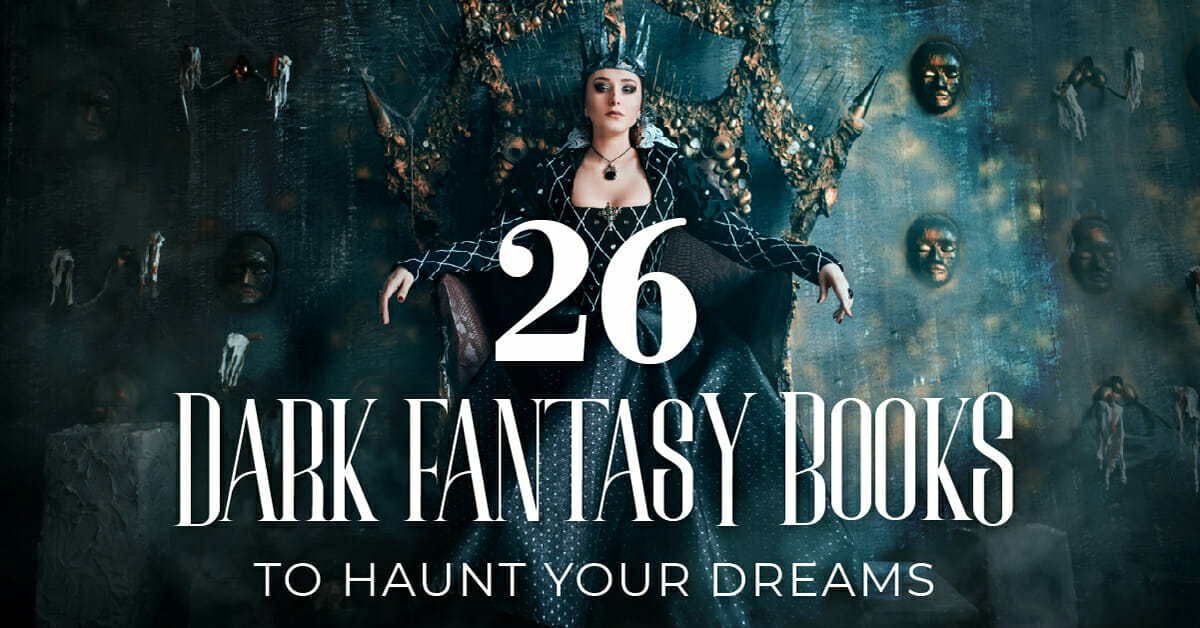