With the world descending into madness and anarchy, one woman begins a fateful journey towards a better future. We just needed to read Parable Of The Sower By Octavia E Butler after hearing all the praise surrounding this novel! It was even crowned A New York Times Notable Book, making it an absolute must-read. So, check out our thoughts on it now!

Parable Of The Sower

A New York Times Notable Book: In 2025, with the world descending into madness and anarchy, one woman begins a fateful journey toward a better future.

Lauren Olamina and her family live in one of the only safe neighborhoods remaining on the outskirts of Los Angeles. Behind the walls of their defended enclave, Lauren’s father, a preacher, and a handful of other citizens try to salvage what remains of a culture. A culture that has been destroyed by drugs, disease, war, and chronic water shortages. While her father tries to lead people on the righteous path. Lauren struggles with hyperempathy, a condition that makes her extraordinarily sensitive to the pain of others.

When fire destroys their compound, Lauren’s family is killed. She is forced out into a world that is fraught with danger. With a handful of other refugees, Lauren must make her way north to safety. Along the way conceiving a revolutionary idea that may mean salvation for all mankind.

Parable Of The Sower starts out in the year 2024. Lauren Oya Olamina is a teenage African American girl who suffers from Hyperempathy (she feels others pleasure and pain as if it were her own), this is due to her birth mother abusing drugs whilst she was pregnant. Lauren lives with her father who is a Baptist Minster, as well as a teacher in the local school. She also lives with her step-mother Cory and her four younger brothers.

In 2024 the world is a dystopian land where the earth has been decimated by climate change. Lauren lives in a gated community in America, away from the extreme poverty that exists outside. In the hills and canyons surrounding Lauren’s community waste, human remains and dogs reside. Drought is widespread and rain has become extremely rare. At the start of the novel it has been six years since the last rain and water costs several times as much as gasoline. Lauren’s father does his best to keep the community together with his teaching and preaching. The community has done it’s best to become self sufficient, doing things such as making bread from acorns to survive. Public services are untrustworthy, the police charge money to come out and even then it can take days for them to arrive.

As time goes on and things become more desperate Lauren starts to lose faith in her father’s teachings and begins to write her own religious verses. These verses are based on her belief that ‘God is change’. She calls her new beliefs ‘Earthseed’. Lauren also secretly plots to leave her community to more to the North where there are rumours of jobs being available.

Meanwhile some cities begin to be taken over by big companies and privatised so people can live there if they pay to. Lauren’s closest friend decides to move to one of these cites but Lauren is untrustworthy of the large companies.

Eventually Lauren’s gated cul-de-sac proves to be no sanctuary anyway. Her family cocoon begins to fall apart and on the outside a drug named ‘Pyro’ begins to take over. The people high on Pyro start fires for fun. Then they begin to start fires as a distraction for looting and stealing. Lauren begins to plan her journey North where she hopes to find a better life and spread her Earthseed religion. But what will she find once she ventures out into the new world.

Written in 1993 by outstanding sci-fi author Octavia E Butler Parable Of The Sower is a novel far ahead of its time predicting a world severely damaged by climate change. In 2022 it hasn’t happened yet but it is not too hard to imagine what could happen in the future if changes aren’t made to rectify this soon or now. This dystopian sci-fi is a scary read because it doesn’t even feel hyper-unrealistic. The novel is very well written and the characters are rich and believable. As apocalyptic novels go this is way up there with the best so if this genre is your thing then you really shouldn’t miss the Parable Of The Sower.

Did you love Parable Of The Sower By Octavia Butler as much as we did? Let us know! 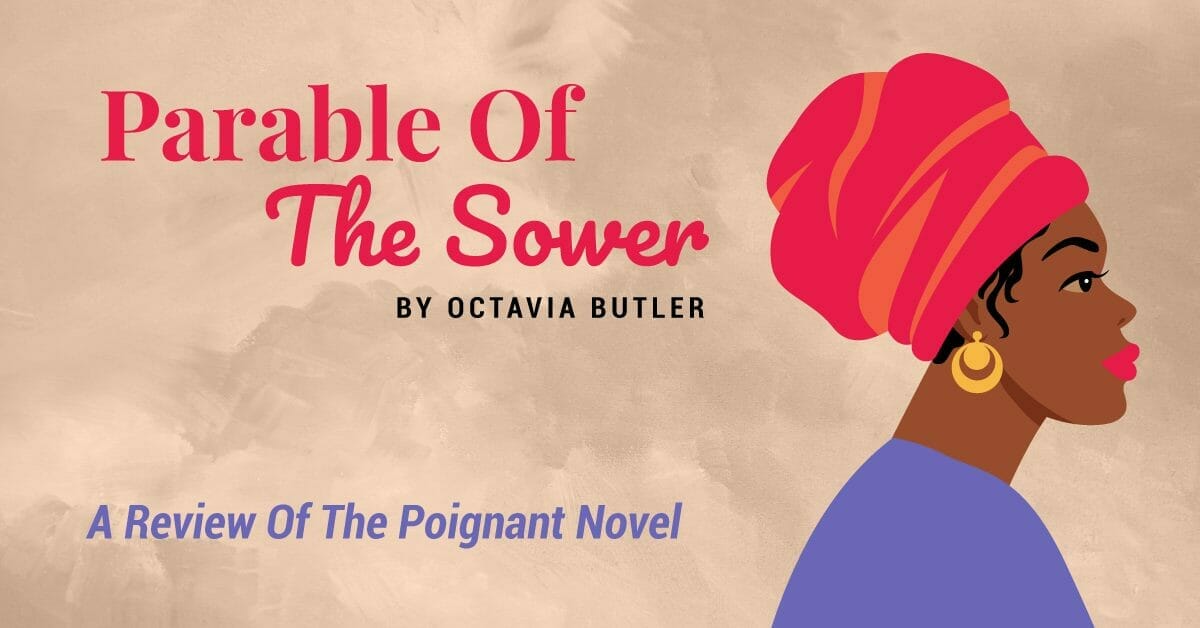