Harry Potter Audiobooks And Where To Find Them

If you are looking for everything you need to know about Harry Potter Audiobooks then we have you covered! Whether you have read the books and now want to experience them in audio or if you just prefer audio books we have all the information about the audiobooks right here! Audiobooks are perfect to listen to on the go or when you are multitasking. On the bus, on the train, on a walk or in the car you can listen to audiobooks anywhere! Narrated by Jim Dale in total these audiobooks will provide you with over 116 hours of listening time. So check out the these Audiobooks right here!

The reading order of the Harry Potter books is as follows:

In the first novel, we are introduced to the young wizard, Harry Potter, and his friends Hermione Granger and Ron Weasley. The three friends are students at Hogwarts School of Witchcraft and Wizardry.

The arc of the main story then covers Harry’s struggles against Lord Voldemort. Voldemort is a dark wizard who wishes to become immortal. Once he has achieved immortality it is then his intention to overthrow the Ministry of Magic (the wizard governing body) and dominate all wizards and Muggles (non-magical people).

Since it’s release the books have sold more than 500 million copies worldwide and they have become the best-selling book series in history. It has also been translated into eighty languages.

In 2001 the first book was released as a movie, which was followed by the rest of the series making it to the big screen. The movie stars Daniel Radcliffe as the titular wizard. With Emma Watson as Hermione, Rupert Grint as Ron Weasley, Tom Felton as Draco Malfoy and Alan Rickman as Severus Snape. The success of the films and books have made Harry Potter one of the most successful franchises of all time.

Harry Potter has never even heard of Hogwarts when the letters start dropping on the doormat at number four, Privet Drive. Addressed in green ink on yellowish parchment with a purple seal, they are swiftly confiscated by his grisly aunt and uncle. Then, on Harry’s eleventh birthday, a great beetle-eyed giant of a man called Rubeus Hagrid bursts in with some astonishing news: Harry Potter is a wizard, and he has a place at Hogwarts School of Witchcraft and Wizardry. An incredible adventure is about to begin!

Having become classics of our time, the Harry Potter stories never fail to bring comfort and escapism. With their message of hope, belonging and the enduring power of truth and love, the story of the Boy Who Lived continues to delight generations of new listeners.

Harry Potter and the Chamber of Secrets – Book 2

Harry Potter’s summer has included the worst birthday ever, doomy warnings from a house-elf called Dobby, and rescue from the Dursleys by his friend Ron Weasley in a magical flying car! Back at Hogwarts School of Witchcraft and Wizardry for his second year, Harry hears strange whispers echo through empty corridors – and then the attacks start. Students are found as though turned to stone… Dobby’s sinister predictions seem to be coming true.

Harry Potter and the Prisoner of Azkaban – Book 3

When the Knight Bus crashes through the darkness and screeches to a halt in front of him, it’s the start of another far from ordinary year at Hogwarts for Harry Potter. Sirius Black, escaped mass-murderer and follower of Lord Voldemort, is on the run – and they say he is coming after Harry. In his first ever Divination class, Professor Trelawney sees an omen of death in Harry’s tea leaves… But perhaps most terrifying of all are the Dementors patrolling the school grounds, with their soul-sucking kiss.

Harry Potter and the Goblet of Fire – Book 4

The Triwizard Tournament is to be held at Hogwarts. Only wizards who are over seventeen are allowed to enter – but that doesn’t stop Harry dreaming that he will win the competition. Then at Hallowe’en, when the Goblet of Fire makes its selection, Harry is amazed to find his name is one of those that the magical cup picks out. So he will face death-defying tasks, dragons and Dark wizards. But with the help of his best friends, Ron and Hermione, he might just make it through – alive!

Harry Potter and the Order of the Phoenix – Book 5

Dark times have come to Hogwarts. After the Dementors’ attack on his cousin Dudley, Harry Potter knows that Voldemort will stop at nothing to find him. There are many who deny the Dark Lord’s return, but Harry is not alone: a secret order gathers at Grimmauld Place to fight against the Dark forces. Harry must allow Professor Snape to teach him how to protect himself from Voldemort’s savage assaults on his mind. But they are growing stronger by the day and Harry is running out of time.

When Dumbledore arrives at Privet Drive one summer night to collect Harry Potter, his wand hand is blackened and shrivelled, but he does not reveal why. Secrets and suspicion are spreading through the wizarding world, and Hogwarts itself is not safe. Harry is convinced that Malfoy bears the Dark Mark: there is a Death Eater amongst them. Harry will need powerful magic and true friends as he explores Voldemort’s darkest secrets and Dumbledore prepares him to face his destiny.

As he climbs into the sidecar of Hagrid’s motorbike and takes to the skies, leaving Privet Drive for the last time, Harry Potter knows that Lord Voldemort and the Death Eaters are not far behind. The protective charm that has kept Harry safe until now is broken, but he cannot keep hiding. The Dark Lord is breathing fear into everything Harry loves and to stop him Harry will have to find and destroy the remaining Horcruxes. The final battle must begin. Harry must stand and face his enemy.

Where can I listen to Harry Potter audiobooks for free?

You can listen to Harry Potter audiobooks for free with an Audible Trial. If you haven’t had an Audible trial recently then you can take out a free 30 day trial from Audible.

How many hours audiobook Harry Potter?

In total there are over 116 hours in the Harry Potter audiobooks. Broken down each title comes in as follows:

What should I listen to if I like Harry Potter?

What did you think of these audiobooks? Let us know! 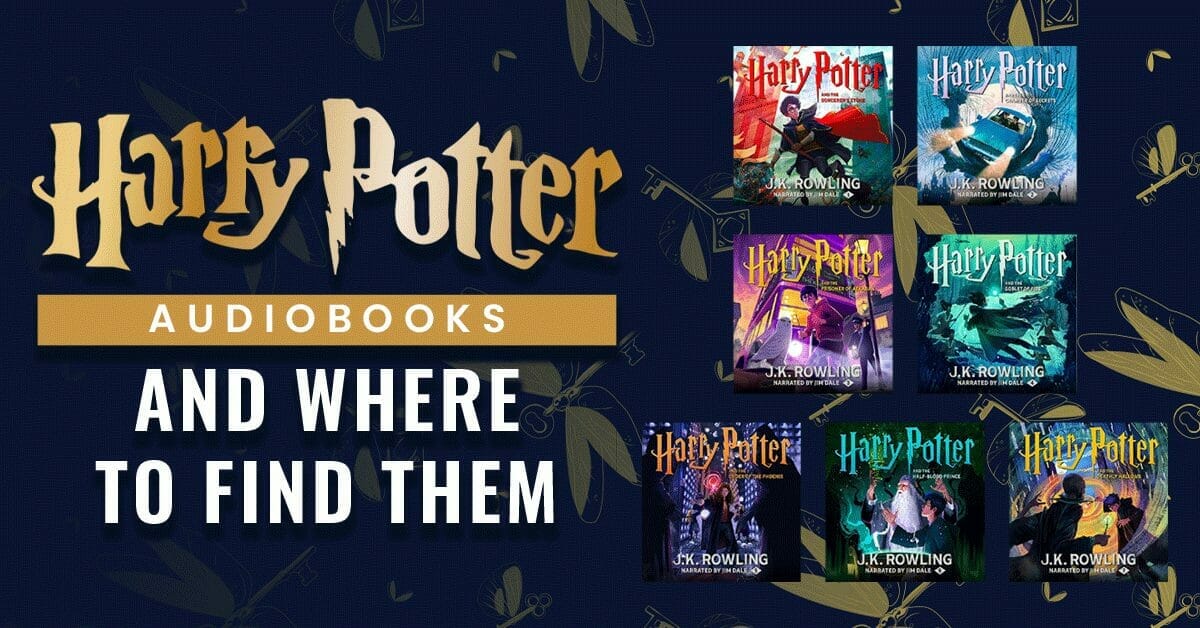