Game Of Thrones Books – A Song Of Ice And Fire

Obviously, you have seen the TV show (who hasn’t?), but have you read the book series yet? The Game of Thrones book series, also known as A Song of Ice And, by George R R Martin is the inspiration behind the hit TV show. As of April 2019, the series has sold 90 million copies and it has been translated into 47 languages. The fourth and fifth volumes reached the top of the New York Times Best Seller lists upon their releases. So, if you haven’t already, check out all of the books in the best-selling series now!

About A Game Of Thrones

A Song Of Ice and Fire is a series of Epic Fantasy novels written by George R R Martin. The first book A Game Of Thrones was published in 1996. There are currently five books published in the series, with a sixth and seventh book planned.

In 2011 the book series was launched into the HBO Series called A Game Of Thrones. It was immediately met with much critical acclaim and was a ratings hit. The show was renewed for a second season very quickly. With popularity growing the TV series continued until the eighth and final season in 2019.

The Song Of Ice And Fire series takes place in a fictional continents of Westeros and Essos. Throughout the series three main stories unfold. A war between several families for the control of Westeros, a threat from supernatural forces, The Others in The North and the King’s exiled daughter’s quest to regain the Iron Throne.

So whether you are a fan of the TV Series or not this is one book series not to miss! Check out everything you need to know about the books below!

The following is the recommended reading order of the A Song Of Ice And Fire series:

In the northernmost of the fiefdoms that owe allegiance to King Robert Baratheon, Eddard Stark of Winterfell rules with his family. But to the north, there lie unnatural beings that are a myth in summer but are all too deadly in the turning of the season.

And in the far south, Jon Arryn, the Hand of the King, has died under mysterious circumstances. Now Robert and his family are heading for Winterfell, where there waits a fateful encounter that will change the course of kingdoms.

Meanwhile, across the Narrow Sea, Prince Viserys, heir of the fallen House Targaryen, schemes to reclaim the throne with an army of barbarian Dothraki.

Click Here To View On Amazon
Game Of Thrones Books

A comet the color of blood and flame cuts across the sky. And from the ancient citadel of Dragonstone to the forbidding shores of Winterfell, chaos reigns. Six factions struggle for control of a divided land and the Iron Throne of the Seven Kingdoms. Each preparing to stake their claims through tempest, turmoil, and civil war.

The wars are still raging as violently as ever, alliances are made and broken. Joffery of House Lannister sits on the Iron Throne, an uneasy ruler of the Seven Kingdoms. Meanwhile, making her way across a blood-drenched continent is the exiled queen, Daenerys, mistress of the only three dragons still left in the world.

The war, which raged out of control for so long, has burned itself out. But as in the aftermath of any climactic struggle, it is not long before the survivors, outlaws and renegades start to gather, picking over the bones of the dead and fighting for the spoils of the soon-to-be dead. Now, daring new plots and dangerous new alliances are formed, while surprising faces are seen emerging from an ominous twilight of past struggles and chaos to take up the challenges ahead.

A Dance With Dragons (Book 5)

In the aftermath of a colossal battle, the future of the Seven Kingdoms hangs in the balance, beset by newly emerging threats from every direction. In the east, Daenerys Targaryen rules with her three dragons. And fleeing from Westeros with a price on his head, Tyrion Lannister, is making his way to her. Meanwhile, to the north lies the mammoth Wall of ice and stone, Jon Snow 998th Lord Commander of the Night’s Watch will face his greatest challenge yet.

Book 6 Winds Of Winter and Book 7 A Dream Of Spring are not yet published. Unfortunately, we don’t even have an expected publication date at the moment. Watch this space because we will update as soon as we find out anything! There is also a companion guide available, The World Of Ice And Fire and a novella called Tales Of Dunk and Egg. Also, there is a new show House Of The Dragon out in August 2022, which is based on the spin off novel, Fire And Blood.

Are there 5 or 7 books in Game of Thrones?

Are the Game of Thrones books finished?

No the Game Of Thrones books series by George RR Martin is not finished. There are five books released but there are two more upcoming books. The as yet unreleased books are Winds Of Winter and Dreams Of Spring.

What is the best order to read the Game of Thrones books?

The best order to read the Game Of Thrones books (A Song Of Ice And Fire) by George R R Martin is as follows:

Which novel in the Game of Thrones book series is your favorite? Let us know! 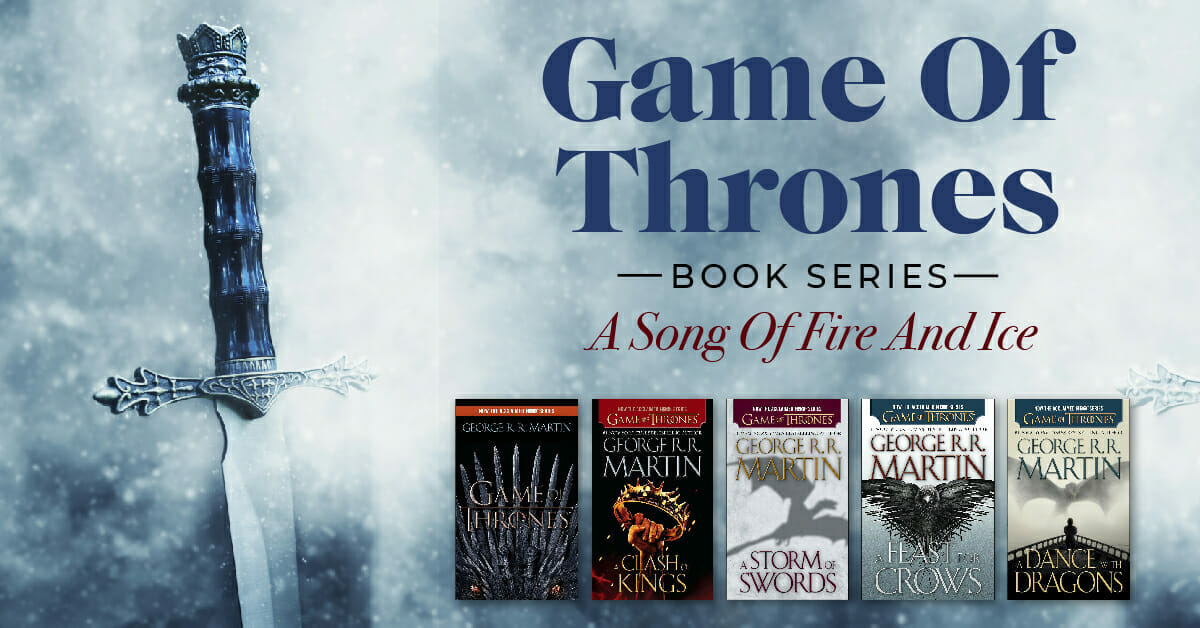