An explorer-tug captain, Alex Racine detects a damaged alien craft drifting into the system. Recognizing a once in a lifetime opportunity to make first contact, Alex pulls off a daring maneuver to latch on to the derelict.

Alex discovers the ship was attacked by an unknown craft, the first of its kind ever encountered. The mysterious silver ship’s attack was both instant and deadly.

What enfolds is a story of the descendants of two Earth colony ships, with very different histories, meeting 700 years after their founding and uniting to defend humanity from the silver ships.

Mother, wife, private investigator…vampire. Six years ago federal agent Samantha Moon was the perfect wife and mother, your typical soccer mom with the minivan and suburban home. Then the unthinkable happens, an attack that changes her life forever. And forever is a very long time for a vampire.

Now in MOON DANCE, the world at large thinks Samantha has developed a rare skin disease, a disease which forces her to quit her day job and stay out of the light of the sun. Working the night shift as a private investigator, Samantha is hired by Kingsley Fulcrum to investigate the murder attempt on his life, a horrific scene captured on TV and seen around the country. But as the case unfolds, Samantha discovers Kingsley isn’t exactly what he appears to be; after all, there is a reason why he survived five shots to the head.

Some people attract stray cats. With parking control officer Mattie Blackman, it’s demons.
At work, in her car, even at the foot of her bed. And with the FBI on the hunt for a rogue demon master, she’s desperate to get rid of them. Thwarted at every turn to solve her problem through legitimate channels, she turns to Shore Haven’s sexy mage for the answer: a fate she refuses to accept.
But as the serial killer’s victims pile up, Mattie realizes there’s only one way to stop a demon masterâ€¦
To save her friends and the people she loves, Mattie must choose between her life and her destiny. 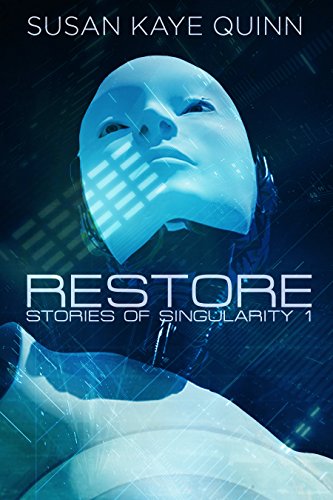 What if the three laws of robotics were replaced by a single emotion: unconditional love. Restorative Human Medical Care Unit 7435, sentience level fifty, wants to heal the human master it loves, but Unit 7435 finds there is a price to be paid for loveâ€¦ and for failing in its primary mission.