From NYT and USAT bestselling authors Denise Grover Swank and Shannon Mayer comes a new twist on the world of vampires . . .

In a city that never sleeps, nightmares live in the darkness . . .

A series of grisly murders begins to pile up in New York City, murders that have no rhyme or reason and no leads. Unless one chooses to believe that the supernatural is possible.

The deaths have caught the attention of two women: Rachel, a journalist fresh home from covering the war in Iraq and Lea, a vampire who has chosen to hunt her own kind.

Together they form a reluctant team that slowly begins to crack the fissures behind a government cover up, bioterrorism and a truth that neither of them could ever begin to suspect until it is too late for either of them to turn away.

Even if it means their lives as they know them will be over.

As a wolf shifter with razor-sharp senses, Jessa Lebron can perceive the slightest change in the air. And her lupine instincts go into overdrive right before her mother, who abandoned her years ago, returns to the pack bearing secrets that change everything.

The biggest secret of all: Jessa is dragon marked, a designation that places her in grave danger. The dragon marked are destined to resurrect the dragon king, a fearsome ancient warmonger. And they must be eliminated.

Soon Jessa is locked up in Vanguard, the notorious paranormal prison that houses criminal vampires, feys, and magic users. Thankfully, sheâ€™s not alone: Braxton Compass, her best friend and a dragon shifter, has her back. Jessa and Braxton must find a way to free themselves and the rest of the dragon marked. But can her pack mates help her stop the dragon king before his deadly return? 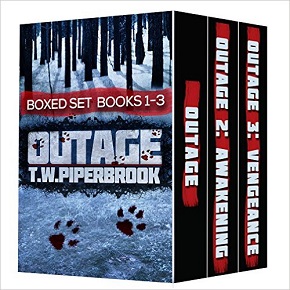 A sensational new series from the bestselling creator of The Darkslayer and The Chronicles of Dragon.

Agent Sidney Shaw is one of the FBI’s finest. Tough as nails with a calculating mind, she thought she was ready for anything.

Enter John Smoke. His spirited arrest methods landed him hard time in prison. The decorated veteran, now branded an ex-con, just wants to serve his time in peace. The powers that be have other plans.

When Sidney is assigned to be Smoke’s handler, both of their lives are turned upside down. She plays by the rules. He trusts his instincts. Fighting to control him, she finds herself chasing him down a secret, dark, supernatural path where a vast criminal network rears its head in the heart of Washington, D.C.

Still grieving her beloved son, Kate Oâ€™Connorâ€™s just going through the motions. She doesnâ€™t care that strangers often shadow her on the unorthodox courier jobs she does for a friend. She doesnâ€™t even care whatâ€™s in the packages until the day she returns from a special rush job with no memory of the event. But it must have been pretty wild, because now thereâ€™s a werewolf in her kitchen trying to kill herâ€”and heâ€™s just the first in line.

Dragged into a supernatural war of succession between the daughters of the dragon queen, Kate discovers a Sydney she never knew existed, peopled by all kinds of strange half-human creatures. To have any hope of surviving she must uncover the explosive secret hidden in her memoryâ€”but first she has to live through the night.