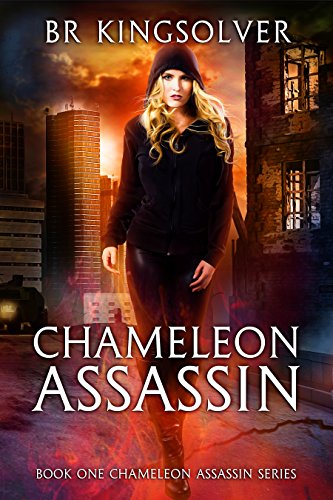 Libby is a mutant, one of the top burglars and assassins in the world. For a price, she caters to executives’ secret desires. Eliminate your corporate rival? Deliver a priceless art masterpiece or necklace? Hack into another corporation’s network? Libby’s your girl.

Climate change met nuclear war, and humanity lost. The corporations stepped in, stripping governments of power. Civilization didn’t end, but it became less civilized. There are few rules as corporations jockey for position and control of assets and markets.

In the year 2200, the world has barely recovered the level of technology that existed before the ice melted and the subsequent wars. The corporate elite live in their walled estates and skyscraper apartments while the majority of humanity supplies their luxuries. On the bottom level, the mutants, the poor, and the criminals scramble every day just to survive.

But even paradise has its problems. A new drug is killing the elite’s sons and daughters, so the Chamber of Commerce hires Libby to find the source. With millions on the line and bodies piling up, she finds herself caught between the corporations and the mob.

When Kate Pierce-Kellerâ€™s grandmother gives her a strange blue medallion and speaks of time travel, sixteen-year-old Kate assumes the old woman is delusional. But it all becomes horrifyingly real when a murder in the past destroys the foundation of Kateâ€™s present-day life. Suddenly, that medallion is the only thing protecting Kate from blinking out of existence.

Kate learns that the 1893 killing is part of something much more sinister, and her genetic ability to time travel makes Kate the only one who can fix the future. Risking everything, she travels back in time to the Chicago Worldâ€™s Fair to try to prevent the murder and the chain of events that follows.

Changing the timeline comes with a personal costâ€”if Kate succeeds, the boy she loves will have no memory of her existence. And regardless of her motives, does Kate have the right to manipulate the fate of the entire world?

Rise of the Dragons

Kyra, 15, dreams of becoming a famed warrior, like her father, even though she is the only girl in a fort of boys. As she struggles to understand her special skills, her mysterious inner power, she realizes she is different than the others. But a secret is being kept from her about her birth and the prophecy surrounding her, leaving her to wonder who she really is.

When Kyra comes of age and the local lord comes to take her away, her father wants to wed her off to save her. Kyra, though, refuses, and she journeys out on her own, into a dangerous wood, where she encounters a wounded dragonâ€”and ignites a series of events that will change the kingdom forever.

15 year old Alec, meanwhile, sacrifices for his brother, taking his place in the draft, and is carted off to The Flames, a wall of flames a hundred feet high that wards off the army of Trolls to the east. On the far side of the kingdom, Merk, a mercenary striving to leave behind his dark past, quests through the wood to become a Watcher of the Towers and help guard the Sword of Fire, the magical source of the kingdomâ€™s power. But the Trolls want the Sword, tooâ€”and they prepare for a massive invasion that could destroy the kingdoms forever.

With its strong atmosphere and complex characters, RISE OF THE DRAGONS is a sweeping saga of knights and warriors, of kings and lords, of honor and valor, of magic, destiny, monsters and dragons. It is a story of love and broken hearts, of deception, of ambition and betrayal. It is fantasy at its finest, inviting us into a world that will live with us forever, one that will appeal to all ages and genders.

The Virus spread. Billions died. The Ending began. We may have survived the apocalypse, but the Virus changed us.

When people started getting sick, “they” thought it was just the flu. My roommate, my boyfriend, my family…they’re all gone now. I got sick too. I should have died with them–with the rest of the world–but I didn’t. I thought witnessing the human population almost disappear off the face of the earth was the craziest thing I’d ever experience. I was so wrong. My name is Dani O’Connor, I’m twenty-six-years-old, and I survived The Ending.

The Virus changed everything. The world I knew is gone, and life is backwards. We’ve all had to start over. I’ve been stripped of my home, my dreams…all that is me. I’m someone else now–broken and changed. Other survivors’ memories and emotions haunt me. They invade my mind until I can no longer separate them from my own. I won’t let them consume me. I can’t. My name is Zoe Cartwright, I’m twenty-six-years-old, and I survived The Ending.

We’ve been inseparable for most of our lives, and now our friendship is all we have left. The aftermath of the Virus has stranded us on opposite sides of the United States. Trusting strangers, making sacrifices, killing–we’ll do anything to reach one another. Fear and pain may be unavoidable, but we’re strong…we’re survivors. But to continue surviving in this unfamiliar world plagued by Crazies and strange new abilities, we have to adapt. We have to evolve.

And more than anything, we have to find each other.