Attack On Titan Funko Pop: Full List of All 30!

Everyone loves a good Funko pop figure. They’ve got some for almost every anime series you can think of – including Attack on Titan vinyl action figures. Although the three main characters – Eren Jaeger, Mikasa Ackermann, and Armin Arlet – are really hard to come by, there are still plenty of others which are just as amazing. There are even some Titans too! So, check out the Attack on Titan Funko Pop vinyl figures now!

About Attack On Titan

Attack On Titan is based on the Japanese manga of the same name by Hajime Isayama.

Centuries ago, humanity was forced to retreat behind 50-meter tall walls for protection from titans, giant humanoid creatures that prey on humans. Then suddenly a titan appears that stands 60-meters tall and with one kick, brings the years of safety to an end. With his mother dead and father missing, Eren swears to get revenge and slaughter every titan. Eren joins the Survey Corps with his friends Armin and Mikasa to fight the titans and take back their home. But when strange things start happening, the Military soon realizes the enemy may be closer than they think.

Eren Jaegar lived in the Shiganshina District with his parents until the fall of Wall Maria. He then joined the Survey Corps with his friends Mikasa and Armin. And swore to wipe all Titans off the face of the earth.

Manga is always printed in black and white and this Eren Funko Pop shows that off!

Though she desires only to live a peaceful life, Mikasa entered into the military to follow and protect Eren. She is considered the best soldier among the 104th Training Corps and becomes one of the military’s greatest assets.

After he transformed unknowingly at the Battle of Trost, Eren is discovered as the first known Titan shifter.

During the end of the first season, Eren goes into a rage mode when fighting the Female Titan.

The Colossal Titan is the biggest Titan – standing at a previously unseen 60 meters, high enough to peer over the top of the Walls.

Get the manga look with the black and white version now!

Known for its high endurance and mobility, the female titan caused a lot of problems for the scouts in their exterior missions.

If the normal Female Titan isn’t enough for you, then maybe this glow in the dark one will be the perfect addition to your collection!

For real fans only! This Titan is rare and a bit on the expensive side. It’s also super sized!

Known as humanity’s strongest soldier, Levi is a fan favorite. And since all the character Funko Pops are the same height, maybe he won’t feel so short for once!

Annie would often appear emotionless and show no interest in befriending the others. Her sole focus was on making it into the Military Police.

Armin is a childhood friend of Eren Yeager and Mikasa Ackerman. Although he appears to be among the physically weakest of the 104th Training Corps, his intelligence and strategic genius makes him an invaluable asset.

Sasha was friendly and fun-loving. And had a great love for food. She’s even got her iconic potato.

Levi is known as a “clean freak”. He is averse to having either himself or his equipment soiled. And he has been known to wipe down his blood-smeared blades while still on the battlefield.

Christa was very shy and kind to the others. She acted selflessly and went out of her way to help people.

Ymir was initially very selfish, cynical, uncooperative, and confrontational. However, she managed to form a close friendship to Christa.

Erwin lost his right arm just below his shoulder after it was bitten off by a Titan.

Member of Military Police Brigade’s First Interior Squad, the captain of the Anti-Personnel Control Squad, and an infamous serial killer. Is there anything Kenny hasn’t done?

An energetic, freethinking researcher of Titans and part of the scout regiment, Hange has been a vital part to humanity’s survival.

Larger and more animal like than any other Titans, the Beast proved to be a formidable opponent.

There’s a new Eren Yeager Funko Pop coming soon! This time he has his Titan fighting gear on and is ready to attack.

This Mikasa Funko Pop shows he mid-air and ready to attack the Titans!

Described as weak-willed and quiet by others, Bertholdt graduated the 104th Training Corps at the 3rd rank. He joined the Survey Corps and served there until his secret was revealed.

Ymir is the Jaw Titan. Which is actually considerably smaller than most Titans, standing at only 5m.

This battle Levi Funko Pop is one of our favorites! With him drenched in blood and ready to attack again, Levi has never looked cooler!

In order to plug the hole in Wall Maria, Eren needed to use his Titan ability to harden and leave behind a hardened replica of his Titan form.

This Levi Funko Pop is dressed up all formally! It’s a change from the usual battle attire and we love it.

Again Mikasa is battle-ready in this epic Funko Pop!

Which of these Funko Pop Anime Attack on Titan do you love the most? Let us know!

Will there be new attack on Titan funko Pops?

Whilst there are not yet any Pops of the new season 4 characters, as part of Funkoween, there have been some new Attack on Titan Funko Pops. New Pops of Eren Yeager, Mikasa Ackerman, Bertholt Hoover, and Ymir’s Titan have released. There are also various new exclusives of Levi, Mikasa, Titans Eren and Annie’s Titan.

What is the rarest Funko Pop you can get?

The rarest Attack on Titan Funko Pop is the Bait Exclusive of Eren. It’s number 20, features Eren in black and white, and has been vaulted.

What are rare anime funko Pops?

Yes, the Armored Titan Funko Pop has been vaulted, which means it’s no longer being produced by Funko. 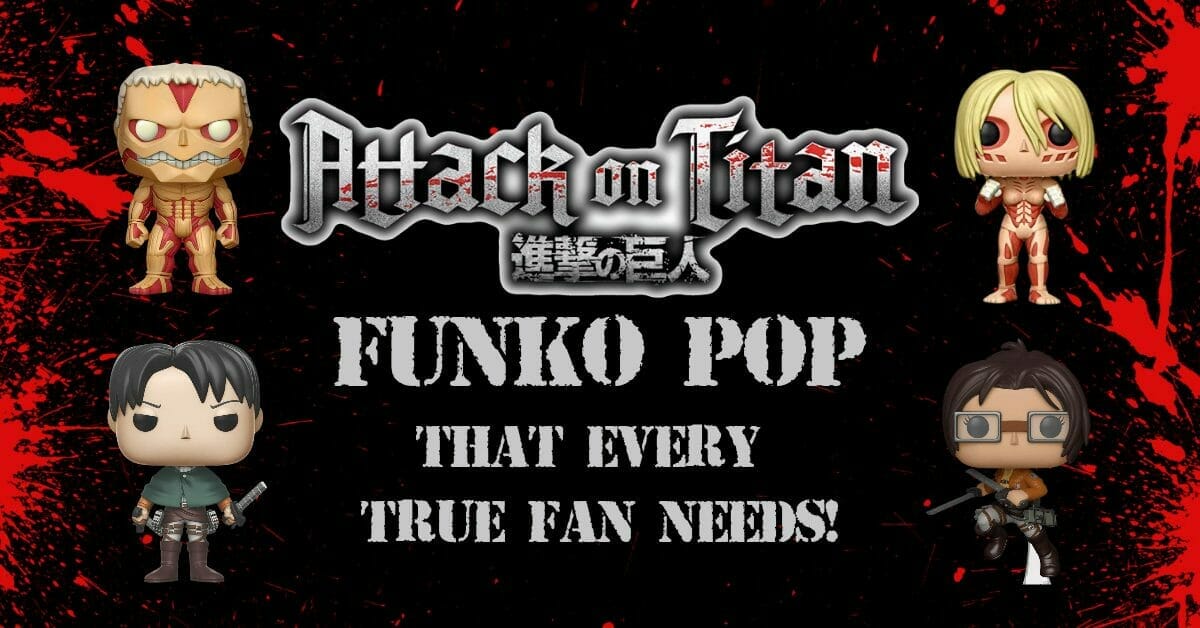