Dekker Knight, mercenary and collector of arcane artifacts, wins the contract to transport Prognon Austicon, an intergalactic assassin, to max-lock detention. When constables bungle the handoff and Austicon escapes, Dekkerâ€™s team is forced to hunt down the galaxiesâ€™ most heinous criminal all over again.

Following Austiconâ€™s theft of a superweapon, Dekker and his team must do the unthinkable to prevent the Earthâ€™s annihilation!

Steampunk time-travel, cyborg ninjas, deep space unicorn zombies, ghostly rocket-ships, and star destroying Hassidic superweapons converge in one epic story! How long can The Dozen escape death? How far can Dekker go to in defiance of fate and pursuit of love before his actions break the universe? 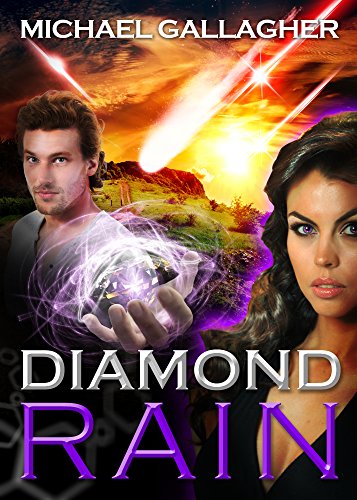 At its heart, Diamond Rain is a high-octane thriller, weaving readers through the streets of foreign locales and whisking them away just as quickly to follow the main characters to their next destination. As the plot unfolds, the stakes intensify, pitting Thomas and an eclectic mix of comrades against a Chinese general hell-bent on world domination.

From tough beginnings in the Bogside of Derry during the Irish ‘Troubles’, Thomas and his family slip away to coastal Maine. After more hardship, Thomas forms lasting bonds with Lanky and Billy and he embarks upon a career as a photographer.

Thomas takes a job with an international news organization when events threaten to overturn the world. During an assignment, chance brings him Kefira, only to see her snatched away from him in the blink of an eye. But all is not lost. Kefira manages to pass a powerful technology to Thomas just as she is on the verge of kidnap.

Equipped with Nanotech, Thomas believes he can rescue her and defeat a reincarnated Mao Tse Tung in Central China. Can he master the Nanosuit and reverse his fortunes? One thing is certain, he’ll do everything in his power to try.

At one peak in the action, Israel deploys tactical nukes to defend against a nano swarm of Chinese men thronging into Armageddon Valley and Europe pays for the Israeli decision when a hastily organized UN peace initiative imposes Sharia Law.

Pick up this sci-fi techno thriller filled with artificial intelligence deploying a devastating breakthrough in quantum computing and weapon systems of the type NASA and Google just bought from D-Wave Systems. A second chance in love depends on Thomas’s wits and mastery of psychic powers that let him travel the Internet. Vengeful gestures haunt him, but love nurtures his strategies.

A box set of MYTHIC proportions …

Want a little magic in your life? Ever wished faeries were real or for your own personal djinn?

Then these THIRTEEN worlds of action, adventure, humor, and romance are for you. Join the freshest voices in urban fantasy and paranormal romance as they bring magic into your life in the form of gods, demons, djinn, faeries, werewolves, and more.

This enchanting collection is FREE for a limited time. Download it before itâ€™s gone!

Salemâ€™s Revenge strikes without warning or mercy, ravaging the powerless human race under the forces of united gangs of witches, wizards, and warlocks. During the slaughter, Rhett Carter’s foster parents and sister are killed, and his best friend and girlfriend are abducted by a gang of witches calling themselves the Necromancers, who deal in the dark magic of raising the dead. Rhettâ€™s sword-wielding neighbor with a mysterious past saves Rhett from becoming another casualty of the massacre and teaches him the skills he needs to survive in this new world.

Rhett is broken, his normal high school life of book blogging and football playing shoved in a witch-apocalyptic blender. The only thing he has left is his burning desire for revenge. Armed with his new witch hunting skills and a loyal, magic powered dog named Hex, he sets out into the unknown with one mission: hunt and destroy those who took away everyone he ever loved.

But Rhett isnâ€™t just a witch hunter; he has secrets of his own that he has yet to discover, secrets that his enemies will stop at nothing to keep him from.

And discovering the truth about himself is the human raceâ€™s only hope.